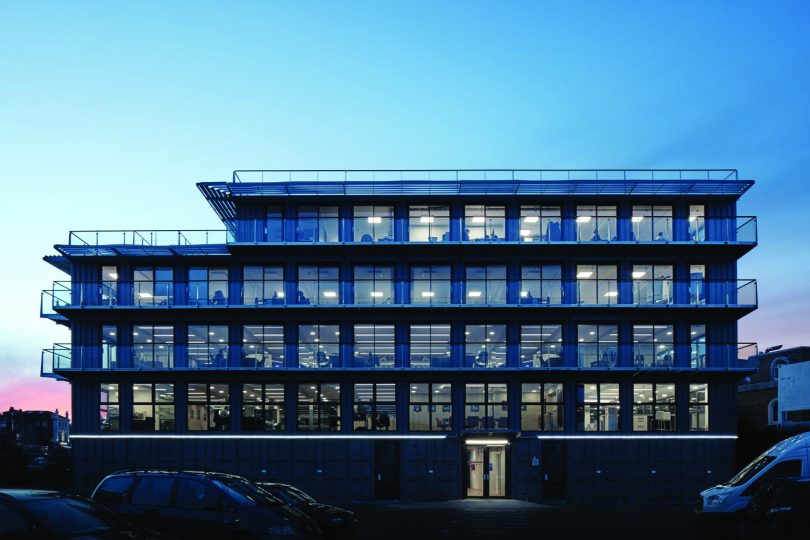 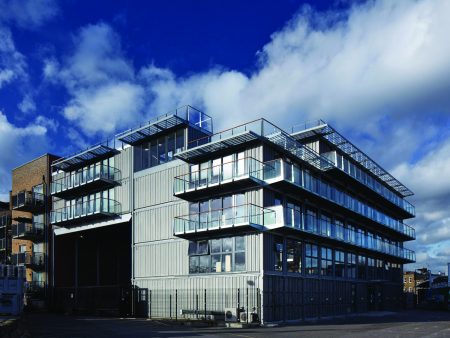 A coveted place of the prestigious RICS Awards 2017 shortlist was just one of the honours scooped by the multi award-winning Roundhouse Administration building project, located on Chalk Farm Road, Camden Town.

Shortlisted in the awards’ ‘Design and Innovation’ category, the building was constructed to accommodate the staff at the Roundhouse – a charitable trust which describes itself as ‘a hub of inspiration where artists and emerging talent create extraordinary work and where young people can grow creatively as individuals.’

As well as accommodating the Roundhouse staff, the building plays an important role in allowing the organisation to develop its artistic activities and expand its programme of traineeships and apprenticeships for young people.

The trust is geared to give young people the chance to engage with the arts through its music, media and performance projects, providing them with an opportunity ‘to reach further, dream bigger, and achieve more.’

The building also won ‘Best Office Building’ at the NLA’s New London Awards 2016 and the ‘Best New Place to Work’ award at the London Planning Awards 2016.

Organised by London First, in conjunction with the Mayor of London, the Royal Town Planning Institute and London Councils, the London Planning Awards is the most prestigious event for the planning and development sector.

The five-storey 22,500 sq ft building was constructed on 42 piles within the curtilage of the Roundhouse’s existing Camden site and replaces the organisation’s former premises, which were demolished.

Located within the former service yard to the west of the original premises, the new building is glazed on three sides with glass balconies and features a section flown over the Roundhouse’s vehicle access route.

Although the building is made from shipping containers, these were specially adapted and strengthened to provide the desired open plan interior layout.

Given the nature of the design, the building is inherently sustainable, both in construction and operation. The scheme incorporates further sustainable elements such as solar panels on the roof and recycled sections from previous USM projects, including the Olympic Broadcast Studios for London 2012.

Henry Fraser, of Urban Space Management (Container City Ltd), who was the project manager for the scheme said: “We are very proud of our design and very pleased to shortlisted by such a prestigious institution as RICS – especially against such stiff competition.”

“From a construction point of view the main challenges of the project was that the Roundhouse venue continued to be used throughout the project – not only by Roundhouse staff but by various acts, shows and performers who required access to the yard alongside the construction team – so we had to work around them. This meant that we had to operate on a very constrained site and share only one entrance.”

“To solve this problem we constructed the scheme on the very few days available when we could access the site freely. In the end it took just 12 days of craning. We achieved this by delivering each section of the building over a weekend when things were quiet and then spending the Monday craning that section into position. At the end of the day the mobile crane left the site and returned when we were ready with the next stage.

“The construction required careful scheduling in tandem with the busy programme of shows which was being put on by the Roundhouse.” 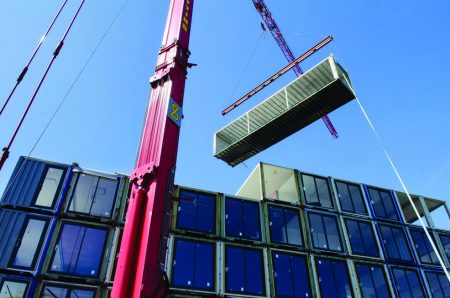 Henry added that another challenge was working within a tight budget, as the client is a charitable foundation with limited resources and he estimates that the building came in at around half the cost of a traditional build.

Furthermore, the building previously occupied by Roundhouse staff was scheduled to be demolished within six months of commencing construction of the new building, so the project had to be completed within that timeframe. Quite a challenge for a building of this scale.

Several months of construction time were saved by pre-fabricating the building offsite in a factory, whilst the foundations were being prepared.

Despite all the challenges posed by the scheme, the works were completed on schedule and within budget and Roundhouse staff are really positive about the impact the new building has had on the organisation.