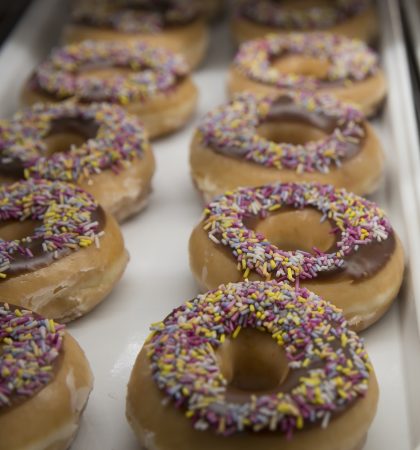 Premium doughnut retailer, Krispy Kreme, is set to open its 100th UK store this month, having entered the market in 2003.

The new outlet, at intu Victoria Centre Nottingham on 23rd August, forms part of Krispy Kreme’s ambitious expansion strategy which has seen the launch of 14 new sites in 2017 alone – with further openings also in the pipeline.

The company, which currently employs 1,532 staff across its outlets and at its Head Office in Frimley, offers 16 varieties of doughnuts and a variety of milkshakes, as well as a wide range of merchandise and gifting products from coffee cups to doughnut-inspired chocolate truffles.

All doughnuts are made and hand-finished at one of 14 Hotlight stores across the country, before being delivered fresh daily to outlets in each surrounding area.

Krispy Kreme was originally launched in 1937 in the USA, before entering the UK market in 2003. It operates 100 standalone sites, with presence in over 500 Tesco stores, motorway service stations and leisure villages across the country. The company produces more than 80 million doughnuts each year.

Richard Cheshire, managing director for Krispy Kreme UK, said: “This opening signals a significant milestone for our company, and one we are very proud to announce. We originally set out to bring the joy of Krispy Kreme to UK customers, and have been working hard to do just that! We’re thrilled that the appetite for our offering is just as strong now as it was 14 years ago and we’re set to continue our growth strategy for many more years to come.”