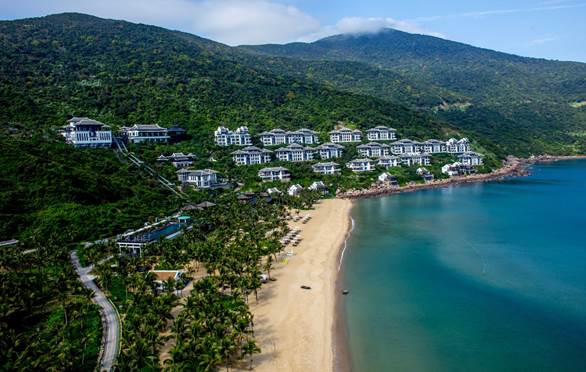 InterContinental Danang Sun Peninsula Resort has announced that the resort will be hosting the flagship event –the APEC Economic Leaders’ Meeting of the 25th APEC Summit, on November 11th 2017.

This year, the APEC (Asia-Pacific Economic Cooperation) Summit lands in Danang, the third largest city of Vietnam. The event marks a milestone in the city’s socio-economic development and has partially outlined the vision of Danang’s future.

Opened since 2012, InterContinental Danang Sun Peninsula Resort is one-of-a-kind resort that redefines the definition of luxury in Vietnam. Crowned as World’s Leading Luxury Resort by World Travel Awards for three consecutive years, the resort contributes to put Danang on the world’s tourist map. To prepare for this tremendously important event, the resort has been working alongside Sungroup, its owning company, as well as the local government and the APEC committee to undergo some mandatory enhancement such as widening internal roads and upgrading technical infrastructure facilities, including a major face-lift for its conference centre, the Summit. Following that vision, a brand-new reception hall of nearly 500sqm was built alongside an array of meeting and function rooms and a VIP lounge with a unique design by the famed architect Bill Bensley. Airy architecture blends the latest technology with a modern interpretation of traditional Vietnamese design elements; adjoining terraces open onto spectacular views of the lush landscape, mountains and sea surrounding the resort.

Labeled as the place “Where World’s Leaders Meet”, the Summit Conference Center will be welcoming heads of government from all 21 member economies, along with thousands of delegates, world-leading entrepreneurs and international journalists. “This is a once-in-a-lifetime chance for us to host such an important and significant event at the resort. Throughout preparation plays an essential role in the success of the event. For months, our team has been working hard under the instructions and guidance of the APEC Committee, Danang’s Government & Sungroup management team to make sure everything is perfect. Located in such a pristine setting, surrounded by a beautiful landscape with panoramic views of the ocean, our magnificent resort is the perfect backdrop to showcase the best that the destination has to offer.” said Mr Juan Losada – General Manager of InterContinental Danang Sun Peninsula Resort.

Danang hopes to make an impression as a perfect host, leaving an extraordinary mark on APEC’s history. Since last year, the city has been gearing up with many projects to ensure state-of-the-art infrastructure, convenient traffic, diversified and high-quality accommodation and services as well as highly trained human resources and security.