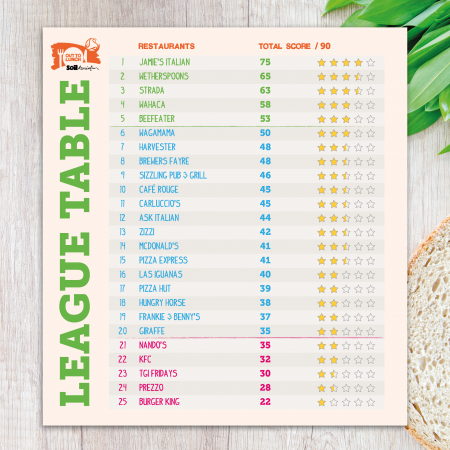 A new league table ranking children’s food in 25 of the UK’s most popular restaurant chains is published today (11 October), on World Obesity Day1, by the Soil Association’s Out to Lunch campaign. Two years since the last league table, several chains have significantly improved their children’s menu, but the Soil Association, working in collaboration with Hugh Fearnley-Whittingstall and with an army of secret diner families, has uncovered continuing widespread poor practice with a number of chains failing to serve fresh food or healthy choices.

Despite continuing poor practice, the Out to Lunch league table shows that children’s food on the high street has undergone notable improvement since the campaign launched in 2013. Working with secret diner families, Out to Lunch has improved over 70 million meals served to children this year5. There are now 13 chains now serving a portion of veg or salad with every meal (up from 6 chains in 2013) and 12 chains that include organic ingredients on the menu (up from 4 chains in 2013).

Rob Percival from the Soil Association said: “Thanks to our secret diner families, Out to Lunch is transforming children’s food on the high street – many restaurants are now prioritising child health and investing in healthier and more creative meal options. But there is still a national scandal unfolding in plain sight: 75% of UK parents say they are worried by the portion size of children’s puddings when they eat out6 We found that renegade chains are ignoring parent concerns by dishing up super-sized calorific junk, undermining national efforts to tackle childhood obesity.”

Restaurants have a big role to play in influencing what children think good food looks like – going out used to be seen as a treat, but research7 shows it’s more common now with 40% of parents eating out with their kids at least once a fortnight. Meanwhile, 66% of parents say they don’t think kids’ food in restaurants is good enough.7

This year Out to Lunch joined forces with TV chef and campaigner, Hugh Fearnley-Whittingstall, who is filming a new BBC One series on obesity. Fearnley-Whittingstall and Out to Lunch urged chains to take action to offer puddings and drinks in a healthier portion size and to include calorie information on the menu. In response, Pizza Hut and TGI Fridays have committed to discontinuing free refills of sugary drinks throughout their restaurants by March 2018; both chains have also committed to including calorie information on the children’s menu. Harvester, Café Rouge and TGI Fridays have committed to offering puddings in a healthier portion size by March 2018.

Jamie’s Italian topped the table with a score of 75 out of 90, and Strada was the biggest climber, moving an impressive 16 places to 3rd position. Since 2015 Strada has introduced a salad with every main meal, a fresh fruit pudding, and the option of choosing smaller portions of adult meals; Strada also offers organic juice, higher welfare RSPCA chicken, and sustainable fish.

The Out to Lunch campaign is calling on all high street restaurants, pubs and cafés to take seven simple steps to improve the service and food they offer children:

An interactive league table featuring a profile of each chain can be viewed (from 11 Oct) at www.soilassociation.org/outtolunch