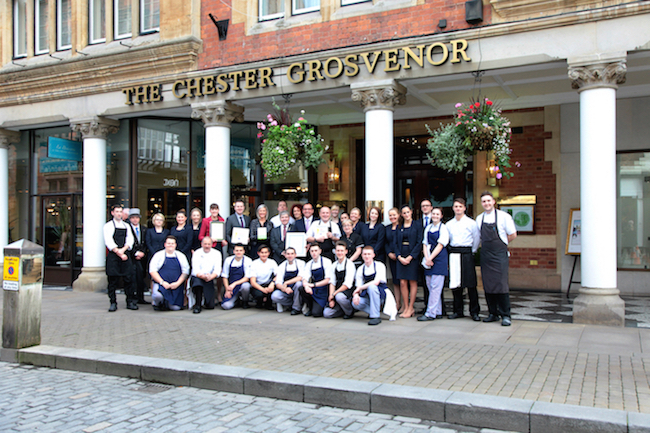 The Chester Grosvenor was recognised as Employer of the Year at Cheshire Business Awards held at Chester Cathedral on Friday, 6th October, fighting off tough competition from Chester Zoo and the Rossendale Trust.

The Cheshire Business Awards welcomed some of the most respected businesses in the region, demonstrating the exceptionally high level of quality competition that Cheshire boasts. The award itself recognises The Chester Grosvenor as an outstanding employer who has shown great vision and leadership, with policies supporting staff development, engagement and satisfaction, creating a positive and supportive workplace with a well-motivated team.

The hotel is dedicated to supporting employees facing challenges either at home or at work and has recently introduced an Employee Assistance Programme, supported by Hospitality Action.

Showing commitment and gratitude to its team, The Chester Grosvenor has implemented a series of motivational rewards throughout the year that commend loyalty and achievement and highlight those who’ve gone above and beyond to enhance the guest experience and demonstrate exceptional team spirit.  This is usually in the form of a celebratory Champagne afternoon tea, hosted by the General Manager to which the success stories of recent months are invited to enjoy the experience as guests and receive a personal gift from the company.

General Manager Richard Grove comments: “Hospitality is about people, and any hotel is only as successful as the people it employs; this ethos is what The Chester Grosvenor is all about. We’re privileged to have vibrant, can-do team members who love the culture, care about each other, share the vision and thrive on a challenge and we’re so proud to have been recognised in the region.”

The Chester Grosvenor boats a significant number of team members who have grown and developed within the business, namely through the Simon Radley Kitchen Academy, which each year recruits 10 young and aspiring chefs on an apprenticeship scheme. These talented earn whilst they learn, working shoulder to shoulder with some of the best in business. Head Chef of La Brasserie, Gareth Jones, began his career at The Chester Grosvenor as a Demi Chef de Parti and now oversees the kitchen operation for the restaurant. The hotel’s Meeting & Events Manager is another prime example of someone who has relished the ‘Grow with Grosvenor’ ethos, joining the hotel at the age of 17 as a casual events waiter and now leading the meetings, events and banqueting operation.

The Chester Grosvenor has an impressive alumni that attribute successes to their careers to the training they received at the hotel. Celebrity chef Paul Hollywood often reflects on his time as Head Baker at the hotel, as does high profile chef and restaurateur Gary Usher, who began working in The Chester Grosvenor’s kitchens in 2000, where he claims to have gotten insight into working with chefs who had a clear passion and enthusiasm for what they do. Both chefs have publicly discussed their time at The Chester Grosvenor in the press, which is a true reflection on the hotel as an employer and one which encourages individual creativity.