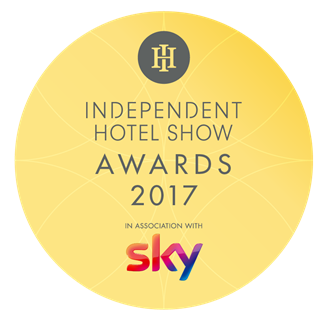 Nominations were shortlisted by a committee of hoteliers, journalists and thought-leaders* and votes cast by the industry.

Independent Hotelier- recognises the spirit of an individual who drives the luxury boutique hotel sector forward with creativity and wisdom. The individual will have made a significant contribution to the independent hotel sector and has a reputation for pushing boundaries and creating exceptional guest experiences.

Paul said: “Well done to all the nominees, I am elated to win award. This really is a nice surprise, and a big surprise as I’ve only been in the hotel industry for 9 years. Carden Park is a big hotel, so to win at the independent hotel show awards is even more special. We will continue to do what we do, which is host the biggest and best conference events for blue chip companies, in the UK. We also have a special announcement coming up, so it’s an exciting time for Carden Park!

I think anyone can be inspired by me winning this award – I had a whole career with the British military before working in hotels, receiving an MBE from the Queen for my service as an army chef, after starting out at the Army school of catering in 1982. If you apply yourself, you can do anything in this industry. That’s key for me – if I can win, anyone can.”

Outstanding New Hotel Award – the Outstanding New Hotel award celebrates an independent hotel that brings dynamism and coveted ideas to the sector. A game-changer with a unique style, the hotel has influenced attitudes within the sector, whilst providing exemplary service and amazing guest experiences, as well as demonstrating remarkable business efficiency.

Jonathan Walker, Managing Director, said: “Thank you, on behalf of everyone at no. 15 Great Pulteney, we are truly delighted to win the outstanding new hotel award – this is the one we wanted to win! After a number of years working at corporate IHG hotels, it was great to go back to being a hotel keeper with the opportunity at no. 15. We have had such great support from the team and people of Bath. We wanted to create a hotel with 100% local business and we are at about 95%, so we’re doing well! On another note, I love TV and sport, so to have Sky available in the rooms has been a real asset to us – so thank you also to Sky.”

Bronwyn de Cholewa, Director at Sky Business said: “We are delighted to award Paul Bayliss of Carden Park Independent Hotelier, and No. 15 Great Pulteney, Outstanding New Hotel. The passion and innovation both category winners demonstrate make them exemplars at creating the best possible experiences for their guests.

“We would also like to congratulate all of those who were included in this year’s shortlist. The calibre of nominees reflects the outstanding strength and creativity that is evident throughout the independent and boutique hotel sector”.

Last year’s winner of the Independent Hotelier award, Kate Levin, General Manager, The Capital, Knightsbridge, says: “I am delighted that Paul Bayliss of Carden Park has been awarded Independent Hotelier. The Independent Hotel Show Awards showcase the individuals who deliver amazing and memorable experiences for guests. Paul is highly deserved of the award, and he is a true ambassador for the luxury boutique hotel industry.”

The Independent Hotel Show is taking place at Olympia on 17 and 18 October 2017 for the sixth time, showcasing the finest of Britain’s independent, luxury and boutique hotel sector. The show is hosting an extensive array of seminars, workshops and key note sessions on its dedicated stages, and providing great networking opportunities with industry experts.