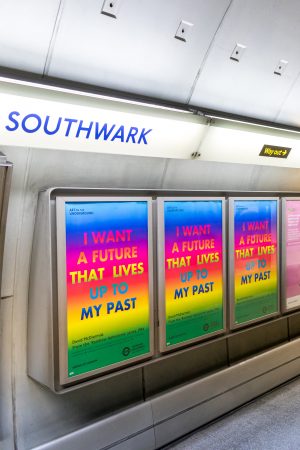 Art on the Underground has teamed up with not-for-profit gallery Studio Voltaire and This is Clapham, to celebrate the work of late Australian artist and activist, David McDiarmid.

‘Rainbow Aphorisms’ (1993-1995), are a series of short and bold statements set on full rainbow backgrounds which reference  McDiarmid’s experience of the AIDS crisis. This is the first major presentation of the artist’s work in the UK.

The vibrant, rainbow coloured artworks, ‘THE FAMILY TREE STOPS HERE DARLING, DON’T FORGET TO REMEMBER and GIRLFRIEND OUR LIFE IS ONE OF LIGHTS AND SHADOWS’ , will be displayed above the entrance to Brixton Underground station and at stations across London.

Eleanor Pinfield, Head of Art on the Underground, said: “Art on the Underground enriches people’s journeys on the Tube each day with innovative approaches to public art. By partnering with Studio Voltaire on their first public project, we can bring the complex, colourful works of ‘Rainbow Aphorisms’ to a new audience across London, challenging familiar messaging around HIV / AIDS.”

Justine Simons OBE, Deputy Mayor for Culture & Creative Industries, said: “I’m delighted that David McDiarmid’s colourful, poignant and powerful works will be displayed across London’s largest art gallery – the London Underground. McDiarmid was a trailblazing gay activist and the Tube network is the perfect way to showcase his messages about living with HIV/AIDS to a wider audience, particularly in the run up to World Aids Day in December.”

Over the course of a year, artworks will also appear on Studio Voltaire’s facade and neighbouring LGBTQ+ venue Two Brewers, and other temporary locations across Clapham and Brixton.  There will also be a number of public events held – more information can be found here: art.tfl.gov.uk and studiovoltaire.org

The project has been mounted with the support and involvement of the David McDiarmid Estate in Sydney.