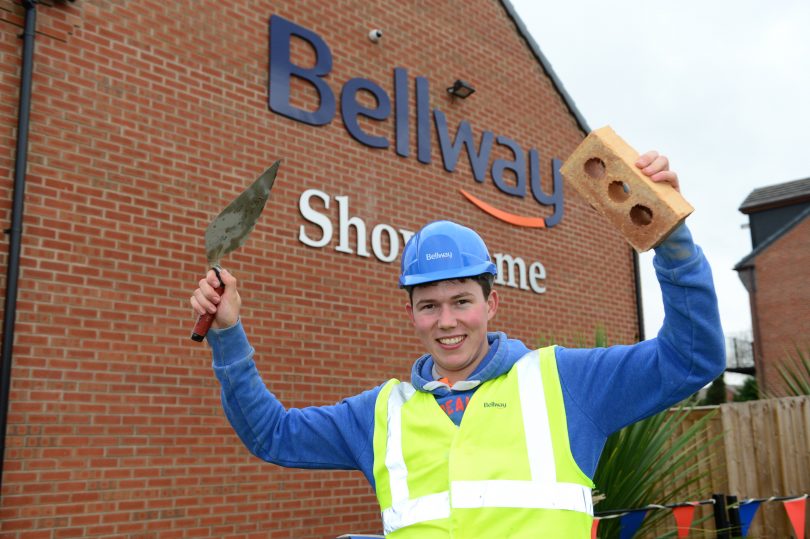 A Stafford College student has won a prestigious award at a national competition.

Sam Yeomans, who lives in Sutton near Newport and is an apprentice at Bellway’s Mallard Walk development in Stafford, won the gold medal at the Skillbuild Bricklaying competition held at the NEC in Birmingham between 16 – 18 November.

The 18-year-old faced stiff competition from other competitors over the three-day event but emerged victorious, with just two marks separating him and the student who won silver.

Sam is currently studying a Level 3 NVQ apprenticeship in bricklaying, and spends one day a week in college and the other four working as a bricklaying apprentice at Bellway’s site in Stafford. His dad John Yeomans also works alongside him onsite.

He said: “I’m so happy to have won the national Skillbuild competition, and very proud of my achievement. It’s quite special to be marked out as the best in the country at something.

“The competition was a real challenge as I had to build three different walls in nineteen hours over three days. I was nervous to begin with but quickly settled into the job at hand. I finished with just fifteen minutes to spare, so time was tight but I was very happy with my finished work.

“My time working as an apprentice on Bellway sites over the last two years has really helped me, and has given me the experience and knowledge I needed to get the gold in the competition.”

Nick said: “Sam is an asset to the team here at Mallard Walk and works very hard. It’s been fantastic to see his confidence and knowledge increase in his time here.”

The Skillbuild competition is part of WorldSkills, which are the biggest vocational education and skills excellence events in the world.