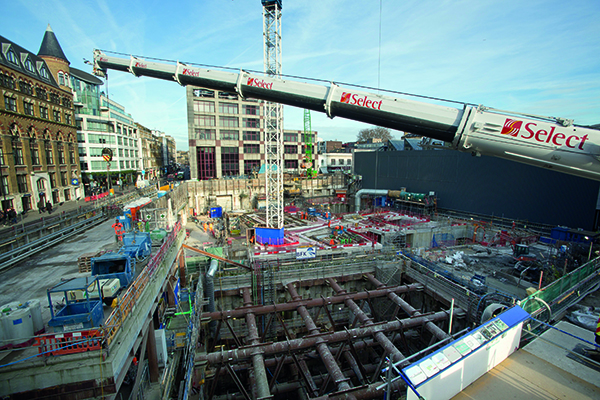 Situated within the heart of the London Crossrail, Farringdon Station is an intrinsic piece in the Crossrail scheme. The London Underground station – which is served by the Circle, Hammersmith & City and Metropolitan lines – is currently being developed to allow for the Crossrail project and once complete will include two new ticket halls to accommodate an expected increase in passengers.

Come 2018, Farringdon will be a key transport link for the nation’s capital and will become one of the country’s busiest train stations, with links to London Underground services, as well as Thameslink and Crossrail. Once work is complete on Farringdon, up to 140 trains will pass through the Farringdon interchange per hour. In addition, Farringdon will connect with three of London’s five airports, including Heathrow and Gatwick, ensuring that it will become a destination facility in its own right. 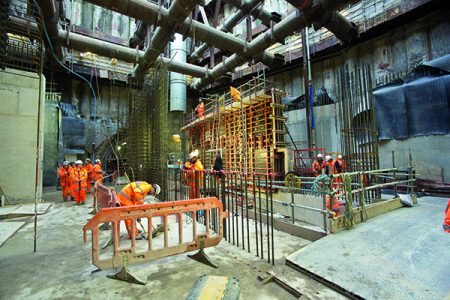 The two new ticket halls are connected by underground 250 metre platforms, 30 metres below ground. The western end located on the corner of Farringdon Road and Cowcross Street will provide access to and from the Thameslink ticket hall. The eastern end is bound by Charterhouse Street, Lindsey Street and Long Lane.

The new ticket hall currently being constructed at Cowcross Street will connect with the Thameslink Ticket Hall and has been designed to be able to accommodate and manage the increased capacity caused by Crossrail services. At the present time floor-to-ceiling platform edge screens are being installed by the rail fit-out teams in Farringdon’s platform tunnels. The screens are a critical safety feature that provides a physical barrier between the platform and the track.

At the other end of the station at the eastern end, a new ticket hall is being constructed adjacent to the London Underground Barbican Station. Two platforms tunnels connect this new hall to the one at Cowcross Street. At 350 metres, the platforms are among the longest on the route. The construction of the new ticket hall is well underway with the steel superstructure now rising out of the ground. When complete, the buildings will provide ventilation and emergency access, and house mechanical and electrical equipment for each of the new ticket halls.

In April 2017 construction of a striking new architectural ceiling was completed at Farringdon. Over 100 diamond-shaped concrete segments, precast by Evans Concrete in Alfreton, Derbyshire, were pieced together to create a dramatic lattice roof inspired by the historic Hatton Garden jewellery quarter located opposite the station. The 25 metre wide ceiling, which weighs over 360 tonnes, is suspended from above to create a memorable cathedral-like entrance that will welcome passengers travelling down to the new Elizabeth line platforms from the western ticket hall.

Farringdon station will open in December 2018 when services begin through central London. Trains will terminate at Paddington in the west and Abbey Wood in the east.

When the route fully opens in December 2019, a train every two and a half minutes at peak time will allow passengers to travel all the way through to Paddington, Heathrow or Reading in the west and Shenfield or Abbey Wood in the east.

The Crossrail route will pass through 40 stations from Reading and Heathrow in the west, through new twin-bore 21 km tunnels to Shenfield and Abbey Wood in the east. The Transport for London (TfL) run railway will be named the Elizabeth line when services through central London open in December 2018. The Crossrail project is being delivered by Crossrail Limited, a wholly owned subsidiary of TfL, and is jointly sponsored by the Department for Transport and TfL. 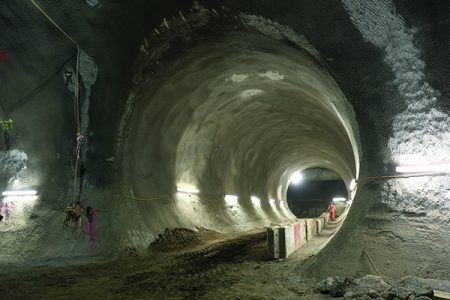