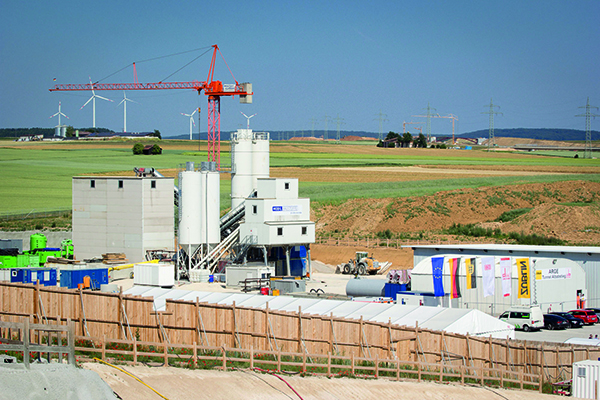 The Stuttgart-Ulm railway project is a major scheme currently underway in Germany. Encompassing two distinctive elements, the project will ultimately form a major part of the European high-seed ‘Main Line for Europe’ which links cities and regions between 5 countries. Stuttgart 21 will transform the city’s railway network with new stations and track while the new section of track between Wendlingen and Ulm will increase capacity and shorten journey times.

Stuttgart 21 is both a railway and urban development project that is scheduled to be completed in 2021. It is the largest upgrading concept for public rail transport in Baden-Württemberg since the 19th century and includes a nearly 60km of new track and three new stations.

At the heart of the project is the new main station which will act as a through station rather than a terminus. Located at a depth of 11 metres, the new station will have a total of eight tracks at four central platforms, each of which is 420 metres in length. The design of architect Christoph Ingenhoven has already won a number of awards and sets a new standard in form, function and ecology. Standout features include 27 glass ‘light eyes’ that allow daylight down to the platform level and afford views of the surrounding landscape. Passengers will also be able to make use of a carefully planned layout that will enable short, barrier-free access. Although it has half the number of tracks, the new main station will be able to serve a significantly higher number of trains.

The second of the three new stations to be built is currently under construction in the Filder area between Stuttgart Airport and the trade fair centre. Served by long-distance and regional trains, the modern structure will be located underground opposite the airport’s main building. The hope is that it will eventually be possible to travel from the airport station to other parts of the country without having to go via the main station.

The third new station to be built will be done so in conjunction with some major urban redevelopment. The new Stuttgart city district of Rosenstein will be created in a central location surrounded by green spaces and includes the new Mittnachtstrasse S-Bahn station. Mittnachtstrasse will remove the need for many commuters to change at the main station, saving time and encouraging more people to use the network.

To connect these new stations an extra 57km of track will be constructed, helping make Stuttgart’s rail network one of the most sophisticated in Europe.

Totalling 60km, the new section of track between Wendlingen and Ulm will enable a fast and convenient way to cross the Swabian Jura region. The new track links seamlessly to the high-speed track that connects the new Stuttgart Main Station with Wendlingen as part of Stuttgart 21.

Trains on the new track will be able to reach speeds of 250 km/h all the way to the outskirts of Ulm which will severely cut journey times for all trains and allow for more goods trains to use the network. The new track takes in 5 major tunnels and one of the tallest railway bridges in Germany which is currently under construction in the Filstal valley at Mühlhausen.

Over half of the route runs in tunnels and creating them continues to form a major component of the overall work. Almost all of the tunnels on the project are using the tunnel boring method. Two common methods are used: the sprayed concrete method and the use of a tunnel boring machine (TBM).

Tunnel boring machines use a rotating cutting wheel to loosen the rock, which is transported away through the machine. After a set distance, the TBM is stopped and the cavity behind it is lined with prefabricated parts called tubbings. Gaps between the hill and tubbings are then filled before work on the next section begins.

The 8.8km long twin-tube Bossler Tunnel, for example, was created using TBM’s. The machines started their work in April 2015 and made a final breakthrough two years later. Pioneering underground technology specialists Herrenknecht played a vital role in the construction of the Bossler Tunnel.

The Albabstieg is an equally important aspect of the project, measuring 5.9km and located on the track leading into Ulm. The tunnel will have two single-track bores when it is complete that will lie approximately 70m below the ground. Work on the tunnel began in June 2014 and will see over 1 million cubic metres of soil and rock removed.

The Stuttgart-Ulm rail project is a scheme for the Stuttgart region and beyond. The construction currently taking place has already generated approximately 5,000 temporary full-time positions. The trickle-down effect of a number of construction firms and their subcontractors has also had a positive effect on job creation.

Once work is completed, the enhanced railway infrastructure will encourage investment and help create thousands of jobs. Reduced travel times between the major economic regions of Stuttgart, Ulm, Augsburg and Munich will bring these areas closer together and create new possibilities.

Stuttgart 21 has also provided the city with a rare opportunity to develop its centre. The fact a large proportion of the rail network set to move underground along with the necessary infrastructure, around 100 hectares in the middle of the city is available for development. Parkland will make up 20 hectares of the redeveloped land. This will help the climate of the city but also create a pleasant environment in which people can work and live.

In addition, two new districts will be created in the city centre – the Europaviertel (Europa District) and the city district of Rosenstein. The Europaviertel is one of the most important urban development projects in Germany and replaces what was previously the central freight station and marshalling yard. The Europaviertel is a fantastic location with excellent connectivity to the rest of the city and the construction of the City Library will help create a cultural centre.

The city district of Rosenstein will be an eco-friendly area that has been created by and for residents, offering a balance between living and working. Extensively car-free, cycle networks will criss-cross the residential areas.

To keep up the progress of the project, please visit bahnprojekt-stuttgart-ulm.de/en.

On site concrete specialist company Mobil-Baustoffe will celebrate its 20th anniversary in 2018. With over 13 million cubic meters of concrete and annual gap materials produced Mobil-Baustoffe is one of the leading suppliers when it comes to on site solutions. Clients can be found in many countries around the globe across the whole spectrum of contractors, from large groups to small businesses.

Working on the Albabstieg Tunnel project near Ulm in Germany, Mobil-Baustoffe together with a partner produced shotcrete, heated and cooled inner lining PP fibre concrete and other concretes summing up to well over 500.000m³.

“For this particular project we installed two batching plants one being a twin plant with overhead aggregate storage. To meet the tight requirements we opted for a powerful heating system as well as a cooling system utilizing flake ice. By doing so we kept the inner lining concrete temperature between 18 and 25°C all year round. We are especially proud to be able to develop individual solutions for every project we approach. By keeping pace with the special requirements of the construction site, we design optimised mixing equipment and coordinate logistic concepts. We develop concrete mix designs that are adapted to the client’s demand and the availability of raw materials independent from the constituent industry. We install the required facilities for the concrete production, we operate them and we dismantle them once construction is completed.”

“We can produce the quantity of concrete required by the client, to the agreed quality, within the specified time frame and at any safe location worldwide.”