The Follo Line Project is currently the largest transport project in Norway and will include the longest railway tunnel in the Nordic countries. The new double track rail line forms the core part of the InterCity development southwards from the capital. The Follo Line Tunnel will be Norway’s first long twin tube rail tunnel and one of the first to be constructed using Tunnel Boring Machines.

The main construction started in 2015 with completion set for December 2021. 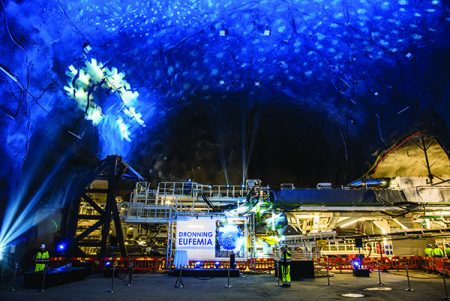 The Follo Line Project in total will comprise around 64km of new railway tracks. The new double track line from Oslo to Ski will be 22km long and is designed for speeds of up to 250km/h. The line will make it possible to reduce the journey time between Oslo and Ski by 50% with the double track line being an efficient, safe and environmentally-friendly system.

The project comprises four tracks to Oslo Central Station, which is Norway’s largest public transport hub. Trains on the new Follo Line will run directly between Oslo and the public transport hub at Ski. In tandem with the Østfold Line, which currently runs between Oslo and Ski, the Follo Line will give improved service to passengers. With a population growth of at least 30% in the region expected by 2025, the Follo Line will link residential and working areas together effectively and will contribute to development in the area.

The Follo Line Project invited companies to tender for five EPC contracts, both nationally and internationally, in addition to the Signal contract (frame agreement). EPC is an acronym for engineering, procurement and construction. This is a recognised contracting arrangement within the construction industry, adapted for Bane NOR, the state-owned company responsible for the Norwegian national railway infrastructure by the Follo Line Project. All contracts were signed in 2015 with the project split into the following EPC contracts:

Between Oslo Central Station and the tunnel, construction of the Follo Line must accommodate other rail traffic in and out of Oslo Central Station so the line will be constructed with connections to several platforms. In addition restrictions concerning the Medieval Park in Oslo must be taken into account, as this is of great archaeological and historical significance.

The bored section of tunnel represents 18.5km. The tunnel, which will pass beneath the Ekeberg Hill in Oslo is about to become the longest railway tunnel to date in the Nordic countries. Excavation has been performed by means of four hard rock double-shielded Tunnel Boring Machines (TBM). This will be one of the first railway tunnels in Norway to be excavated by TBM, a technology that is otherwise common in the excavation of long tunnels in Europe. In addition, drill and blast techniques will be utilised for some of the tunnel work of the Follo Line Project.

The tunnel will comply with inter-European safety requirements for long tunnels with cross passages approximately every 500 meter to be used as escape routes. The life expectancy of the tunnel will be at least 100 years.

TBMs are well suited for the construction of this tunnel due to:

The new tunnel will become the first long rail tunnel in Norway with twin tubes to facilitate:

Drill & Blast is the most common method used in tunnel construction in Norway. In the 70s and 80s Tunnel Boring Machines were also utilised although they were less complex and mainly used to excavate hydro-electric power tunnels.

The decision to use TBM for excavation of the main part of the tunnel at the Follo Line Project paves the way for alliance-building, skills, upgrading and innovation as both national and international participation is most likely.

Tunnel Boring at this project is a system comprising precast impermeable concrete elements installed in a closed ring to ensure protection from rock fall, as well as water and frost. The space behind the concrete elements is filled with cement grout to seal the gap between the rock face and the ring.

Production and installation of concrete elements will form part of an industrial process. This will help ensure a high quality and consistent quality of components, as well as the actual installation process.

Polarmatic specialise in heating systems for the concrete production process in cold ambient conditions, assuring the right concrete temperature is used. The company supplied The Follo Line project with the right heating equipment required for three concrete batching plants at the rig area.

Commenting on their work for the project, Juha Niemi from Polarmatic said: “It is important to produce fresh concrete at the right temperature to gain the required strength at a given time. In demanding conditions, in terms of concrete output and ambient temperature, our heating technology is the only choice to work with.”

The rig area at Ásland, a rural site on the outskirts of Oslo, includes facilities for production of precast concrete segments. From the rig area, two TBMs work towards Oslo Central Station to be connected to conventionally blasted tunnels in the Ekeberg hill. A further two TBMs work in a southerly direction towards SKI to be connected to a future cut and cover section. The entire TBM tunnel construction is accessed and supplied via two access tunnels at the rig area. All four TBMS were launched from assembly caverns constructed at the bottom of these access tunnels.

Together the access tunnels cater for traffic to and from the main tunnel, as well as removal of excavated material by belt conveyors to the rig area. The tunnels are also important to secure air supply to the main tunnel. The assembly chambers for the TBMs will be reused as future rescue and evacuation facilities.

Speaking to Rail Construction News about the project, Line Fredriksen from AGJV, the projects main contractor, said: “The TBMs have completed more than 50% of the TBM tunnels. That means AGJV has bored 18,000 meters since Eufemia, the first one, started in September 2016. We have also established a tunnel city at Åsland, including living barracks for 450 people, offices, storage areas and other facilities, a big segment factory with three production lines and a complex logistics system.

“It’s unique that four tunnel boring machines are being operated simultaneously from one big scale rig area for the first time in Europe. That makes the project very interesting for the whole tunnel world. TBMs are not usual in Norway, most tunnels are made by traditional drill and blast. The organisation has been established in a short time with many nationalities, different cultures and complex logistics. It is a project in good shape and we are really proud of our team and the good collaboration with Bane NOR. We have been able to manage the project in a proper way. Our ambition is to be on schedule and on budget. Half bored, it seems like we will succeed.” 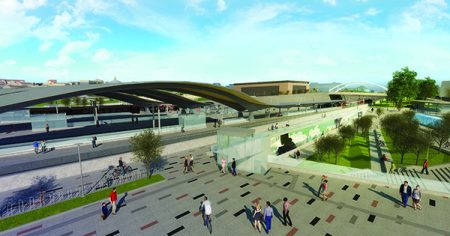 The Follo Line will run along a 1.5km open section south of the tunnel before reaching the public transport hub at Ski. Retaining walls and culverts are constructed along this section, and it is necessary to realign the Østfold Line in order to achieve efficient train operation.

Within the station area itself, the new Ski Station is constructed with six tracks and three central platforms, a new pedestrian underpass, a new road bridge, bus terminal and enlarged car park. Accessibility efficient transport and integration into the urban landscape are important factors to Bane NOR.

The contract has a value of 475 million NOK and includes work on a new railway infrastructure from Oslo S to Ekeberg Hill and for the inner part of the Follo Line and the Østfold Line. The work involves the design and construction of a final track layout and installation of technical systems. In addition, auto-transformers, high-voltage and low-voltage systems will be built and will be facilitated for signal and telecommunications.

The engineering work began in May 2017. The main works will commence in January 2019 and will continue until autumn 2021.
For more information on the Follo Line project visit: http://www.banenor.no/follobanen