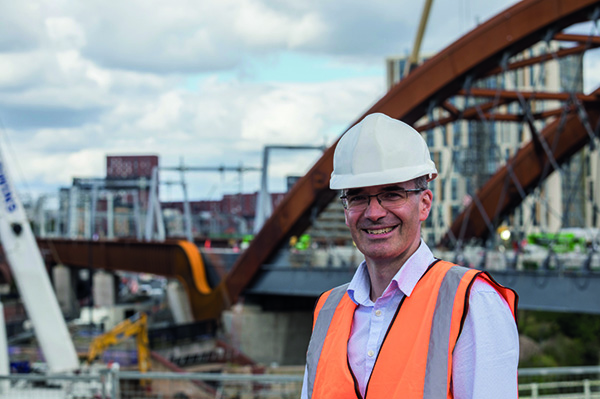 The Manchester studio of BDP has played a key part in the hugely significant civil engineering rail project the Ordsall Chord, which completed on 9th November.

The Ordsall Chord line is 300m of track and a series of new bridges and viaducts designed by BDP in collaboration with engineers from Parsons Brinkerhoff, Aecom and Mott MacDonald.

The new rail link will connect Manchester’s Piccadilly and Victoria rail stations for the first time and unlock new routes and improve connections and journey times across the north of England.

BDP’s Manchester studio has designed all the major architectural and urban realm elements of the project, including the landscaping and lighting to public spaces and heritage features beneath the bridges and viaducts.

BDP advised on the development of the rail alignment and with the engineering team came up with the design concept and form for the main structures, including designing the 89m wide centrepiece of the Ordsall Chord project – the first asymmetric rail bridge in the world.

The bridge, which will carry trains over the River Irwell, began with simple sketches by BDP’s Transport Architect Director Peter Jenkins before the wider project team developed into the 1,600-tonne structure in place today.

“This project has had significant historic issues to manage, with a series of viaducts and bridges arcing around past Liverpool Road Station, the first passenger railway station in the world and an 1830 bridge by pioneering rail engineer George Stephenson.

“In total there are three Grade I listed and twenty-one Grade II listed structures on or around the site, which show the importance of this location in the global history of passenger railways.

“Stephenson’s Bridge was neglected and disused before the Ordsall Chord. Now it can be celebrated for its character and importance.”

Martin Frobisher, route managing director of Network Rail, said: “The completion of Ordsall Chord is a seminal moment in the Great North Rail Project, which will transform train travel for millions of customers across the north. The old is giving birth to the new. We are mirroring the vision of George Stephenson for the benefit of the communities we serve for generations to come.”