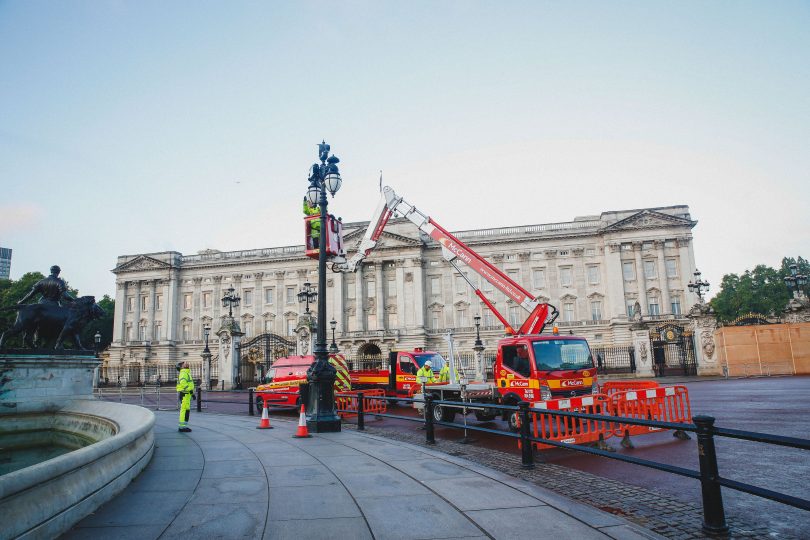 McCann praised by The Royal Parks for successfully completing street lighting and re-cabling works for The Mall and Constitution Hill during one of the busiest times of the year.

A leading civil and electrical engineering firm, J McCann Ltd (McCann) has been praised for successfully completing street lighting and re-cabling works along two of London’s most iconic landmarks – The Mall and Constitution Hill – during what turned out to be one of the busiest periods in the royal calendar.

It was October 2016 when McCann won the original tender commissioned by VINCI Facilities on behalf of The Royal Parks – the Government organisation that manages the eight Royal Parks and certain other areas of garden and parkland in London. Existing cables which supplied the electric street lighting in these areas were approximately 40 years old and had deteriorated significantly in recent years. As a result, there were supply failures to a number of columns and the cable desperately needed to be replaced and upgraded.

“The Mall runs north east of St James’s Park from the Queen Victoria Memorial at the west end, to Admiralty Arch at the east,” explains McCann Project Manager, Michael Nicholson. “It’s lined on both sides with large established trees and is a grand processional route in honour of Queen Victoria so it has seen innumerable historic Royal processions – from coronations to state visits. It was our role to bring its lighting and cabling into the 21st Century, without losing any of its traditional aesthetic grandeur, and with minimal disruption to the general public and the royal household.”

The McCann team approached this specialised work as it does every project – with meticulous planning and attention to detail. Working for maintenance contractors VINCI Facilities, they began with a series of pre-works, undertaking an electrical survey and duct survey to fully establish what they were dealing with. This led to McCann’s highly experienced team making a series of suggestions to the electrical designers, Peter Brett Associates LLP.  The close collaboration enabled McCann to assist the designers with practical engineering solutions the team had gained using similar technologies in other projects.

“It soon became apparent that in order to provide the best possible solution, we’d need to create a new duct system and use different cables to the ones planned, as the originals were just too large for the existing space,” says Michael Nicholson. “We also suggested an IP rated joint system at each column to allow easy access for maintenance.”

Starting much later than anticipated, thanks to the General Election, the McCann team began in the summer of 2017 with the Constitution Hill part of the project, so as not to interfere with the royal calendar of events. Over a period of 4 ½ weeks, Michael Nicholson managed a small team to connect 18 lighting columns and over 470 metres of new duct.

“We faced unique challenges daily,” explains Michael. “Obviously the area is highly populated with visitors, so the health and safety of both the team and the public were of paramount importance. In addition, security was also a top priority, so we ensured we maintained a very positive relationship with the Palace Police and the Metropolitan Police, as they regularly had to request that we stop work, or move locations at a moment’s notice!”

Having to manually dig around trees, relocating for the changing of the guard, and working around 200 members of the world’s media covering the story of The Duke of Edinburgh’s retirement, were just some of the unusual working conditions faced by the McCann team. But their extensive planning and lighting and cabling experience ensured the Constitution Hill part of the project was a success.

The project then moved to the Mall, where the McCann team constructed a new ‘brick pier’ feeder pillar, similar in size and detail to an adjacent existing one.  They then re-cabled all the lights on the north side, utilising part of the existing duct, but also creating around 250m of new ducts in the process. In total, the team re-cabled 23 galleon twin globed columns along the Mall.

“We faced the same challenges on the Mall – working around tourists, royal events, security issues – but again, our team rose to the occasion and completed the works in just over 4 weeks, a couple of days ahead of schedule,” adds Michael Nicholson.

“The advantage of the new system is that if there ever was a system failure it would affect every third column only, so the areas would remain mostly lit throughout,” says Michael. “That said, the system is now much more robust, with cables protected against fuel, water ingress etc, ensuring a lifespan of around 20 years or more.”