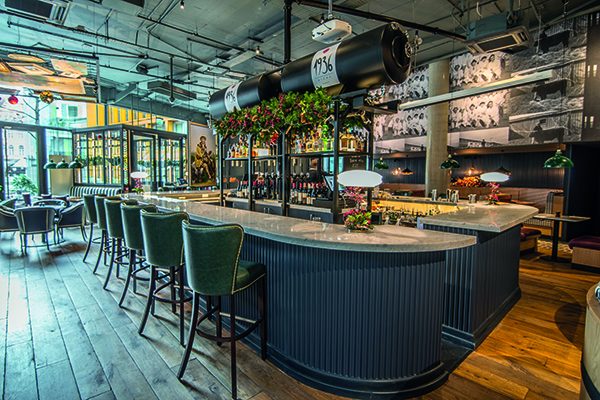 The third London restaurant for the award-winning Zelman Meats brand has opened, bringing a contemporary take on the traditional Chop House to the city. Brought to the market in 2015 by the group behind Goodman, Burger & Lobster and Beast, Zelman Meats has quickly established itself as a premier destination for eating, drinking and socialising.

Zelman Meats St Pauls carries on the brand’s most popular elements, from the menu to the restaurants design, with a few new twists for good measure. To carry out the design of the space Zelman once again collaborated with Shed, who were tasked with creating a warm and comfortable atmosphere. 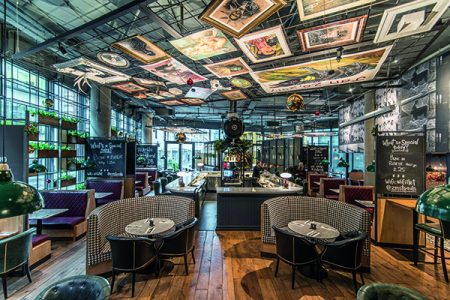 “We’ve actually done two other projects with Zelman Meats. The first project was in Soho when we took over the former Rex & Mariano site and transformed it into the first Zelman Meats,” said Rebecca Pitt, Designer at Shed. “The second one that we did for them was in Finsbury Park and is known as Zelman Drinks. That was more of a bar and music venue.”

Having started working on the St Pauls site in May 2016, the project was completed in November 2017. The brief given to Rebecca and the rest of the Shed team was to bring the spirit of Zelman Meats into a building that also demanded an element of reinvention. She continued:

“We were taking the classic and best elements of the brand but also making Zelman’s relevant to the city. We’re in St. Pauls and we wanted to create both a restaurant and an after work drinking environment. This city clientele meant we had to make some design decisions that were a bit more sophisticated.

“Zelman Meats is true to itself and is a contemporary take on the traditional chop house. It’s very much about hospitality, generous and comfortable seating and a long, enjoyable dinner. The twist is that it’s definitely not very traditional.”

Externally, the fully glazed façade is dominated by individual halo lit steel letters that spell out Zelman Meats. Customers then move through the main doors into an innovative lobby space that is dominated by a display cabinet that houses a procession of beautifully illuminated wine bottles. Once arriving in the main restaurant space, eyes are immediately drawn to the large, imposing white marble bar that is at the heart of the venue.

One of the biggest challenges posed by the space was creating an atmosphere in such a large area. A variety of booth seating designs help create a comfortable and intimate dining experience. Blue-black and bottle green leathers complement the familiar oxblood red. Similarly, the huge ceiling height has been negated by a floating gallery of over 150 pieces of art. Using four metal grids, pieces of art created by Butch Anthony have been suspended and range from large paintings to photographs, sculptures and real skulls.

Finally, two private dining areas are enhanced by the presence of piranhas housed in two 3-metre long tanks. Visible across the main dining area, the tanks are ideal for the soft, dimly lit space and add a quirky element to the design.

Feedback on the space so far has been hugely positive and bookends a successful 2017 for Zelman Meats which saw the brand win a Harden’s London Restaurant Award in the Best Steaks & Grills category. Rebecca added:

“We’re very pleased and privileged to be working with the Goodman Group. They are very good at what they do and I think they are going to be very successful. We want to create formidable brands and help build brands. I think this is something we’re good and have experience doing. We hope to continue our relationship with Zelman Meats and work on bigger and greater things.”

To find out more about Zelman Meats, please visit zelmanmeats.com. 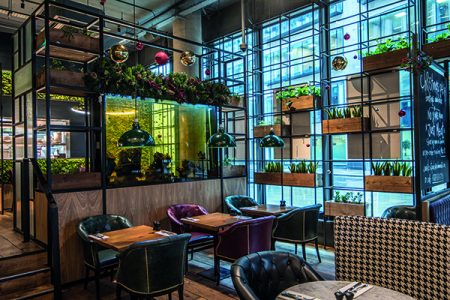 JBE Interiors is an interior fit out contractor, specialising in the fit out of restaurants for the hospitality sector. The company has been in operation since August 2017, but managing director Jason Beedle has a vast wealth of experience in the industry, having previously operated HCM Interiors.

“We valued our involvement on this project. All projects are important to us and help us build strong relationships with our clients.”

“At JBE Interiors we pride ourselves on our ability to build lasting working relationships, which lead to the construction of more new restaurants.”