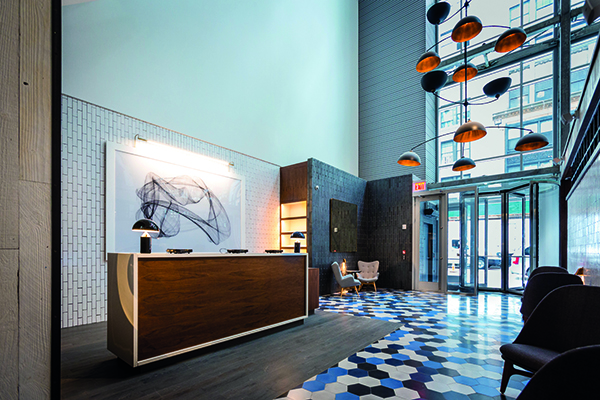 Just two blocks from the up-and-coming Hudson Yards redevelopment in the Garment Centre, Crowne Plaza HY36 brings a new edge to upscale chic in New York. Sleek and design-centric, this stylish newcomer offers a refreshing urban oasis for the city traveller to work, play and recharge in the greatest city in the world. The hotel is the first new hotel in the Hudson Yards area and boasts the largest atrium in that neighbourhood. Upon its soft opening the property immediately became the city’s number one hotel on TripAdvisor.

Architectural work on the hotel was undertaken by architecture and design firm Stonehill Taylor and is a testament to the firm’s vision for the city’s hospitality architecture. HY36’s striking features include intricate use of metal on the façade, a dramatic 80ft steel-and-glass atrium lobby, an angled sound-absorbing wall in the back of the lobby and a sky lighted dining room/bar in the back. 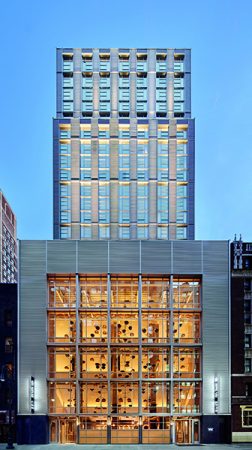 “The exterior of the hotel is made of corrugated aluminium so it has an industrial grittiness to it, but at the same time there is a lot of depth to the façade,” Neill Parker, Principal at Stonehill Taylor and lead architect for the project tells Premier Hospitality.  “The 80ft high ceiling at the front of the building houses the lobby and the restaurant. There is also a marquee that spans 60ft across the front; it’s all glass and suspended by sail boat rigging—a web of cables similar to those supporting the Brooklyn Bridge.”

Parker explains that when a guest enters the hotel, the ceiling above curves away, intensifying the feel of the 50ft depth of the lobby, when in reality the 80ft high part is only 25ft wide. There are also dramatic light fixtures that stand at about 50-60ft tall, pulling your eyes upwards.

A modern, urban escape, the 251 guest rooms at Crowne Plaza HY36 offer a heavenly sleep experience, paired with spa-like bathroom amenities including refreshing rainfall showers. A neutral colour palette, sleek lines and ultra-modern amenities—thanks to K & Co., the interior design firm behind the public spaces, and to Glen Coben, who was responsible for the guest room interiors—fuse to create a welcome urban sanctuary.

The development began in autumn 2013 and came with some challenges for the project team. Parker discusses the particular obstacles faced with building a hotel in the Garment District of New York, noting that “one of the challenges, which led to the most interesting thing about the project, was the street wall zoning requirement in this particular area of Manhattan.”

“The Garment Centre zoning requirements have a street wall preservation regulation for this site. One must build the front façade at the property line up to a height of at least 80ft.  Above that point, the entire building façade must be set back 15ft. Most zoning districts in the city don’t have this street wall preservation requirement. As a result, most new hotels built in the city set the front of the guestroom tower back and create a plaza or a podium in front and all the guestrooms are the desired uniform depth.”

Ultimately, Stonehill Taylor designed a regular concrete-framed set-back building with a streel-framed, lightly constructed and dramatic atrium structure in the front to fill out the street wall. The rooms are positioned to stand straight and uniform.

The new HY36 property is reinventing the Crowne Plaza brand in a dramatic new way as part of a concurrent brand revitalization effort by its parent company, the InterContinental Hotels Group.  It offers a genuinely personable and exciting guest experience unlike any other in New York City.

“This project has been quite satisfying, because I hadn’t done a project with five-story columns soaring through the lobby, 70ft windows and 60ft chandeliers,” Parker concludes. “I believe it is a significant innovation in how buildings can be built today in New York.” 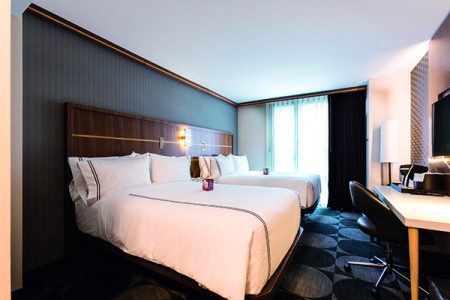