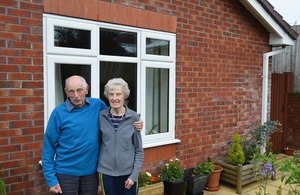 A Cheshire couple, who live less than 80 metres from a motorway, have become the first in England to benefit from a new free double glazing scheme to reduce noise.

Fred and June Glass from Frodsham have taken advantage of a Highways England initiative which will see the owners of more than 3,000 homes across the country being offered free noise insulation by spring 2020.

Mr and Mrs Glass moved into their home around two years ago and were contacted by Highways England contractors due to its location close to the motorway.

The stretch of the M56 near their home is used by over 124,000 vehicles every day, meaning they previously had to put up with constant traffic noise at all times of the day and night.

Now, thanks to the scheme, the noise levels in their lounge and bedroom are like a library, and ventilation units have also been fitted which allow air into the rooms without the windows needing to be opened.

Funding for the free noise insulation scheme is part of a £39 million special fund which Highways England is using to reduce noise levels for people living close to motorways and major A roads; it also includes installing noise barriers and low-noise road surfaces.

Mr Glass said: “We are delighted to have new double glazed windows and frames installed, free of charge, to help with reducing the noise levels.

“The entire process has been really easy and the communication with Highways England’s contractor, Forrest, and the care taken during the installation was superb.

“We’re really satisfied with the end result and have noticed a huge difference in day-to-day noise levels.”

Highways England has identified locations where new glazing will be the best solution for reducing noise levels, and the owners of some 3,000 eligible properties will be contacted over the next few months to be offered free windows and doors.

Ian Holmes, Principal Noise Advisor at Highways England, said: “Motorways are vital for connecting the country and supporting the economy but, at a local level, noise from the vehicles using them can affect people’s health and wellbeing.

“I’m delighted that Mr and Mrs Glass have noticed a significant reduction in the noise levels in their home, and look forward to bringing similar benefits to thousands of other residents.”

Highways England has appointed Bolton-based construction company Forrest to carry out the first phase of its free noise insulation initiative.

Darroch Baker, Divisional Director at Forrest, said: “As a contractor with the ability to manage all aspects of this important scheme, including resident communication, property surveying and installation of the proposed improvements, we are thrilled to be appointed by Highways England.

“The project is a great opportunity to contribute to improvements in the health and quality of life of the population most exposed to high traffic noise levels.”