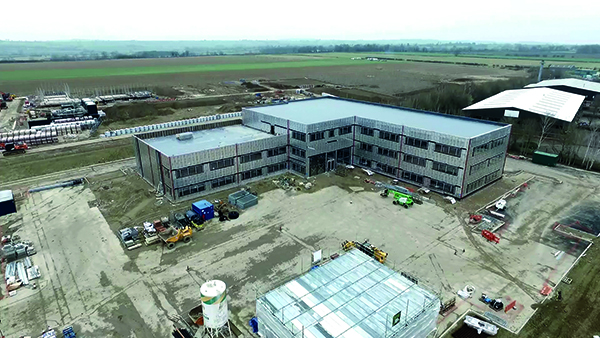 After nearly thirty years in Thame, Oxfordshire, DAF Trucks is moving to a new facility in neighbouring Haddenham, Buckinghamshire. The new three storey facility will be complete in July 2018 and will have almost 50,000 sq.ft of office space. The new headquarters will also include a state-of-the-art auditorium, as well as a fully equipped four-bay training workshop to offer world class training facilities for DAF dealers and employees.

Francis Hunter is responsible for the project management of the development, alongside contactors Harmonix and Oktra and architects Darling Associates Architects and interior design specialists Maze Workplace.

How did Francis Hunter get involved with the project?

What exactly has the project involved for Francis Hunter?

“We are involved across all aspects of the job so we supported the acquisition of the land, managed the planning process, have project managed the design, procurement and construction phase, the fit-out and furniture so we have been fully involved from day one.”

I understand the project started on site in May 2017. What has been done so far?

“The building has achieved water tightness. We have two construction packages so one contractor [Harmonix] is building the shell and core and the second contractor [Oktra] is doing the internal Cat A and Cat B fit-out.”

What was the site like before the build commenced?

“It is probably best described as a brown field development site that had been designated as development land by Haddenham Council.”

What kinds of facilities will the building house?

“It is one building, which is an L shape, and there are three storeys for the office side of the building and two storeys for the training side. The office element is predominately sales, marketing and admin functions for the main part but it also has a comprehensive training facility.”

Are there any design features or anything of interest that you think stands out?

“It is a brick clad building with ribbon windows and is not something you would immediately expect people to be building these days. It’s quite traditional and conservative in its styling but that is very much the PACCAR / DAF brief. PACCAR are a company that has been established for 100 years so they want their buildings to match this brief.

“What we are doing is building a building that fits within the PACCAR portfolio of buildings so they were very particular and specific about how the building should look and perform.  We visited Seattle, where Paccar is based, to see what they were doing over in the states and to visit some of their other sites and developed a brief that matched the existing building stock that they have.”

Have there been any challenges with the project?

“There were two major design challenges. One was to create some column free space for an auditorium on the ground floor of the building and that was quite a technical challenge. The second is that we don’t have any raised access floor.

“Due to lease dates the project has been delivered against a very tight timeframe. We have designed a project programme whereby we can complete this project in just over two years, when it would normally take three.  You would normally purchase the land, secure planning, commence the design, start the shell and core construction and then start the fit-out. We have effectively overlapped all of those activities to get this building completed and operational in two years.”

Finally, how important has this project been for you to work on?

“From a Francis Hunter perspective it has been a major part of our business for two years and a significant project for us. To be involved in a project where you get an occupier who commissions a building is quite rare. For me personally, it has been a fantastic project to work on. They are a great client as well and really nice people to work with and that always makes a difference.”