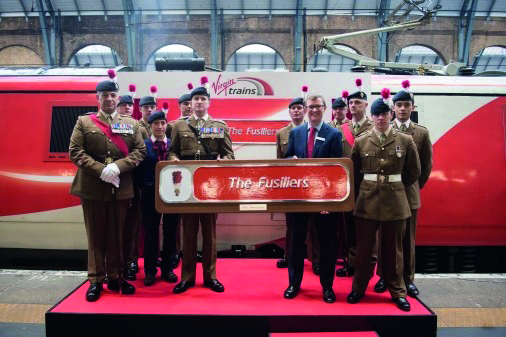 Aboard the Fusiliers Express

The Royal Regiment of Fusiliers have been honoured with the naming of a Virgin Trains Class 91 locomotive to mark its fifty year anniversary.

The special naming ceremony and unveiling of ‘The Fusiliers’ train took place on Tuesday 27th March 2018 at London Kings Cross. Representatives from the First and Fifth Fusiliers provided a Guard of Honour along with Colonel of the Regiment, General Paul Nanson who will officially name the train along with David Horne, Virgin Trains’ managing director for the east coast route. Serving Fusiliers and veterans were welcomed on board before it then made its journey North to Newcastle for an official welcome ceremony.

The Regiment’s anniversary year goes under the title of Fusilier 50 and to commemorate this major milestone and naming of ‘The Fusiliers’ train is the latest initiative between Virgin Trains East Coast and The Royal Regiment of Fusiliers who have a long standing working relationship going back many years.

The newly named, high speed train will be operational on the East Coast Main Line between London, Yorkshire, the North East and Scotland.

Colonel James Denny, Regimental Secretary for the Royal Regiment of Fusiliers said: “We are delighted to have a train named after the Regiment in this, our 50th anniversary year. It demonstrates our longstanding relationship with Virgin Trains, using both the east and west coast routes as we always use both Virgin East and West coast lines to travel between our Regimental Headquarters in London, the North East and the North West. A huge thank you to all the team at Virgin Trains for their continued support for the Regiment and we all look forward to seeing our ‘personal’ train in service.”

David Horne, Virgin Trains’ managing director for the east coast route, said: “It is an honour to be able to name one of our trains to mark the 50th anniversary of The Royal Regiment of Fusiliers.

“It will be seen the length and breadth of the east coast route, from London to Edinburgh, Yorkshire to North East and the Home Counties, and is a fitting tribute to all those who have served their country with such dedication.”

The Royal Regiment of Fusiliers, known as ‘The Fusiliers’, is an English infantry Regiment in the British Army, formed from four historic Fusilier Regiments in 1968. Since then, the Fusiliers have seen service across the world in Northern Ireland, Cyprus, the Balkans, the 1st and 2nd Gulf Wars and Afghanistan. The Regiment has two battalions – First Fusiliers in Tidworth and Fifth Fusiliers in Newcastle – and both adapt readily to challenging scenarios.

Stagecoach and Virgin are working in partnership to operate the East Coast and West Coast inter-city routes under the Virgin Trains brand. Together, they are on track to revolutionise rail travel across the UK.

The combined network connects some of the nation’s most iconic destinations including Glasgow, Liverpool, Birmingham, Manchester, Edinburgh, Newcastle, Leeds, York and London.

On the East Coast route, £140m is being invested to create a more personalised travel experience. We have already invested over £40m in our existing fleet, including £21m refurbishing interiors and £16m towards improving the engines of our trains. Customers can now benefit from 48 additional services between Edinburgh and London every week, and an extra 22 Saturday services between Leeds and London – a total of 1.74 million additional seats since May 2015. 2018 will see the introduction of completely new Azuma trains being built in the UK by Hitachi.

The West Coast route has a proud record of challenging the status quo – from introducing tilting Pendolino trains, to a pioneering automated delay repay scheme and becoming the first franchised rail operator to offer m-Tickets for all ticket types.