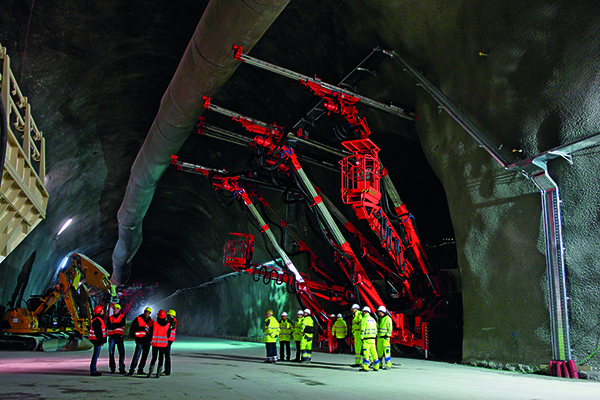 An integral component of a multi-million pound scheme designed to construct a New Rail Link through the Alps (NRLA) in Switzerland, the Ceneri Base Tunnel, under construction in Switzerland’s Canton Ticino, will provide a continuous flat route from Altdorf to Lugano.

Once complete, the New Rail Link will make it possible to cross the Alps from the North to the South in just 2 hours and 40 minutes. The new flat route will allow efficient rail transport for both goods and passengers.

The Ceneri Base Tunnel comprises two single-track tunnels, each measuring 15.4km in length and around 40 metres apart, which are linked to each other every 325 metres by cross-passages. Because of the tunnel’s shorter length, no track crossovers or multifunction stations are needed.

The tunnel was excavated entirely by drilling and blasting, with the minimum depth of overlying rock being only a few metres.

Most of the excavation was performed simultaneously in both directions from the intermediate heading at Sigirino. Inward drives were also cut from the portals at Vigana and Vezia.

Driving to the south progressed faster than forecast. In the west tube, breakthrough to the inward drive from Vezia already took place on March 17, 2015 – 13 months ahead of the construction schedule!

On January 21, 2016, the miners and many invited guests celebrated the final breakthrough of the Ceneri Base Tunnel in the west tube. The breakthrough took place with great accuracy: the vertical deviation was less than 2 cm, and less than 1 cm horizontally. 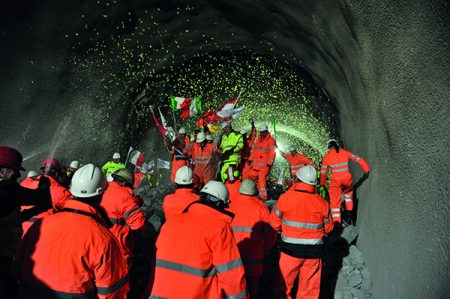 The tunnel was then fitted out with the mechanical, electrical and ventilation systems vital to its operation.

In order to simplify spare-parts management as well as acceptance processes, wherever possible in the Ceneri Base Tunnel, the same components were used for the tunnel infrastructure systems as in the Gotthard Base Tunnel. This relates particularly to the doors, ventilation systems and the technical floors in the 48 cross-passages.

More than 50 jet fans, which are mounted near the portals and in the middle of the tunnel, provide the necessary ventilation of the tunnel during maintenance and in the event of incidents.

The works have also included the installation of railway infrastructure systems such as the track, overhead conductor, electric power supply, cables, telecommunication and radio systems, safety and automation systems, and control systems.

“To link the Ceneri Base Tunnel to the existing railway line, various structures were built at the Camorino junction. Most prominent is a four-track bridge over the A2 motorway and the two railway viaducts.”

In addition to the planned route, a link between Locarno and Lugano was added, to improve passenger journeys.

Ambros Zgraggen concluded: “At the request of the Canton of Ticino, and to meet its needs, a Locarno-Lugano link is also being implemented. It reduces the journey time for regional traffic between Locarno and Lugano from today’s 55 minutes to 22 minutes. For international traffic it will be a reduction of around 10 minutes.”

The Ceneri Base Tunnel is expected to open in December 2020.