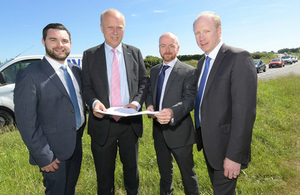 People affected by plans to cut congestion on one of the major roads in Cornwall are urged to find out more at a series of events over coming weeks.

Highways England aims to dual an eight-mile stretch of the A30 between Chiverton and Carland Cross.

This will help to improve journey times for residents, businesses and visitors, as well as unlocking one of the last bottlenecks in Cornwall.

After opening the plans up for public consultation earlier this year the company is now continuing its community engagement, attending the Stithians Show on 16 July and the Camborne Show on 21 July. They will also be participating in a live web chat on Friday, 27 July.

Project Manager Josh Hodder said: “We were at the Golowan Festival in Penzance last weekend and received plenty of interest from both communities local to the scheme and holiday-makers, and we are keen to keep communities updated on our plans.

“Since consultation, we have been progressing with details of the design, working to reduce impact on the environment, and continuing our engagement and discussions with local communities.

“I’d urge anyone with an interest to come and chat with us to find out more and answer any questions they have.”

Highways England is now finalising the details of the scheme, before submitting its planning application in late summer at which point people will also have the opportunity to register with the Planning Inspectorate to have their say.

He was updated on the county’s improving transport links and services by Cornwall Council, and he also saw first hand the heavy traffic on the A30 and heard from the project team for the planned A30 Chiverton to Carland Cross improvement scheme.

Subject to statutory approval, construction is planned to start in spring 2020.

In the meantime, anyone wanting further information on accessing the web chats can go to the web page.