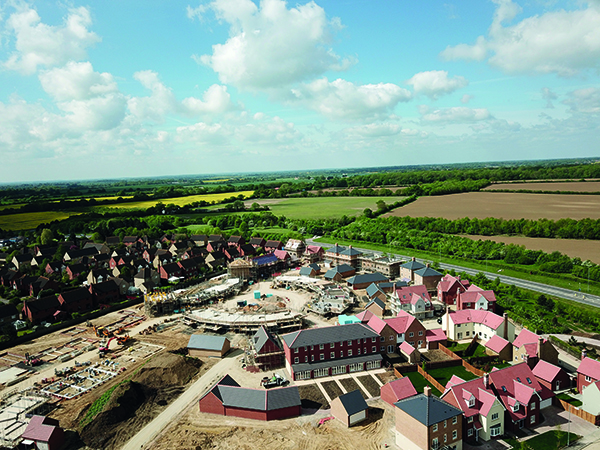 Woodlands Park – A pride of awards

Scooping yet another NHBC Pride in the Job Award on one of the most highly decorated sites in the country at Woodlands Park, Great Dunmow Essex, is Senior Site Manager Aaron Parradine of Wickford Development Co Ltd.

Back in 2012 Aaron was recognised with an NHBC Pride in the Job award for his work on the site and has shown great consistency over the last six years by reaching the finals four times.

Woodlands Park is an ever expanding housing development comprising a mix of one, two, three, four, five and six-bedroom properties.

Great Dunmow is a long standing market town, rich in character and sharp on individuality in the Uttlesford district of Essex.

Originally the site of a Roman settlement on Stane Street, the town thrived during the Middles Ages with many buildings surviving from this period, including a sixteenth-century town hall.

The Woodlands Park site has been under development since 1998 and is under construction by principal contractors E.J Taylor & Sons Limited.

Wickford Developments’ original plan for the site was to construct between 1700 and 1800 houses and due to the size of the work, construction was split into phases.

The houses on the Woodlands Park site are being constructed using traditional methods of brick and block, with timber joists, solid internal brick walls and facing brick exterior. The homes also incorporate UPVC windows, a Hallmark front door and back gardens. In addition to the landscaped areas included with each house, a number of open spaces have also been incorporated into the development to create green areas throughout the site.

Quality from start to finish’ is the maxim of Wickford Development’s founder, who has headed a winning team of top class tradesmen that have collectively won, for more than 55 years, over 40 individual NHBC Pride in the Job awards – including ten times regional winner and UK finalist.

E.J. Taylor & Sons Limited was established in 1963 by Edgar James Taylor and his two sons Michael and Bob, with the help and support of the rest of the Taylor family. Committed to providing employment for both themselves and the local community, the family has worked hard to build a good reputation and to be proud of the company that exists today.

Along with his children Samantha Peck and James Taylor, Bob continues to direct the company. With teams specialising in their own specific areas, E.J. Taylor & Sons Limited is able to offer a wide portfolio of works, provided to the same high standards as it always has, and to employ many local people and businesses. E.J. Taylor & Sons Limited looks ahead to a secure future for the generations to come.