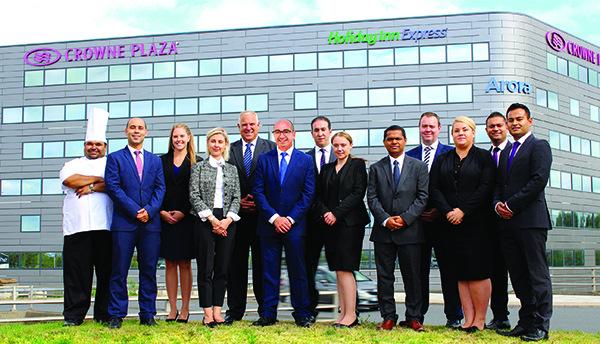 The hotels are a three-minute walk to the terminal building and when finished in October, will be the largest hotel complex directly connected to a British airport terminal.

The hotels are conveniently located within walking distance of Heathrow’s terminals via a link-bridge and with direct access to the London Underground, Heathrow Express train service and nearby motorways.

Kaushal Niraula, Group Strategy Director at The Arora Group said: “We are delighted to be nearing completion on this fantastic project. Constructing hotels on such a scale in such close proximity to Europe’s busiest airport was a challenge, but we have a very experienced team and we are hugely proud of the achievement. The two new Terminal 4 hotels will be superbly positioned to cater to the leisure and business travel market.

“This new development is a testament to the group’s diversified business model focusing on growth through a strategy of vertical integration within the wider real-estate industry and airports market. By 2019 the Arora Group will be the first company to serve all airport terminals at Britain’s two largest airports, Heathrow and Gatwick, which was used by a combined total of over 123 million passengers in 2017.”

The new senior management team for the hotels will lead the largest hotel opening in the UK this year. The executive team of ten will work across the group’s two linked Heathrow Terminal 4 hotels when they open in October. The experienced team has been drawn from a variety of backgrounds, some of whom have been promoted within Arora Group. They will join Andrew Brown, the recently appointed General Manager for both hotels.

Andrew Brown, who is the opening General Manager for the two hotels joined the Arora Group in 2014 and was previously General Manager at Macdonald Hotels, Q Hotels, De Vere Group and Trust House Forte Group. He has extensive experience in the four and five-star market and has launched various conference, leisure, golf and spa hotels within the UK and is an associate of The British Hospitality Association and a Fellow of the Institute of Hospitality.

Crowne Plaza London – Heathrow T4 and Holiday Inn Express®  London – Heathrow T4 will join the company’s expansive airport hotel portfolio; which includes the Softiel London Heathrow at terminal 5; Renaissance London Heathrow at the central terminals of Heathrow Airport; Softiel London Gatwick at the North Terminal and Hilton London Gatwick airport at the South Terminal. Another addition will be Hilton Garden Inn London Heathrow Airport, situated in the Central Terminal Area at Heathrow and due to open in early 2019. On completion of the project, the Arora Group will become the first company with hotels connected to all Heathrow and Gatwick terminals, via Central Terminal Area (T2 and T3), T4 and T5 at Heathrow and the North and South Terminal at Gatwick. 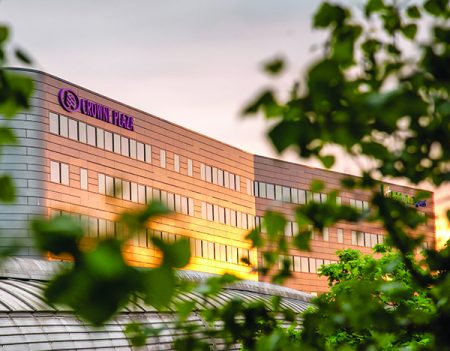 EYG Commercial is a specialist glazing contractor with a proven track record of delivering on projects ranging from £30,000 to £6m across all sectors – from commercial and retail to residential and modular buildings. The company is part of the EYG Group, which operates commercial, domestic and trade businesses, was established in 1971, has a turnover in excess of £24m and installs on sites across the UK.

Recent completed contracts for EYG Commercial include a £5.13m glazing project at the Chocolate Quarter, one of the UK’s largest care homes for the St Monica Trust in Keynesham; a £5m glazing contract at Quebec Way in London on behalf of the L&Q group; and a £1.2m glazing package for a new 620-bed Premier Inn hotel at Heathrow, which required specialist soundproof glazing.

“We were delighted to be selected for this project as it was another endorsement of both our products and our work on a major development in the capital. It followed on from our work at the Premier Inn at Terminal 4 and has further enhanced our reputation in the hotel glazing sector.”

“At EYG Commercial we pride ourselves on our reputation as a trusted contractor and specialist glazing experts. We design, manufacture and install and have sought to lead the way in bespoke product development. Our many independent accreditations, alongside the testimonials of our clients, stand us apart.”