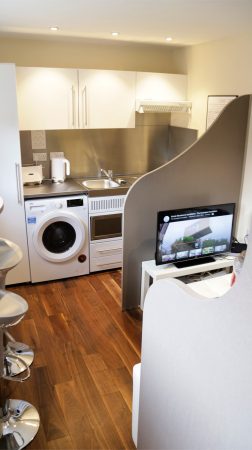 City Councillors backed plans for 16 single-person iKozie homes to be built on a former brownfield site in the city centre, which iKozie director Kieran O’Donnell believes could be a template and inspiration for similar housing solutions across the country.

Construction will begin in early 2019 and the scheme will contain a mix of five affordable homes, which will be allocated to individuals put forward from Worcester City Council’s housing list, with the remainder privately rented homes. Of the 16 homes on the plot, two will be disabled friendly, while a proportion will be double stacked.

The iKozie first captured the world’s attention when unveiled by The Homeless Foundation in October 2017, of which O’Donnell is also a trustee

The beauty of the iKozie, which was designed by O’Donnell and Andrew Eastabrook of Eastabrook Architects, is its ability to deliver a stylish and desirable home for one in just 17.25 square metres. The iKozie features a bedroom, shower room, living area and full kitchen including all appliances. The ergonomic home was inspired by yacht interiors and first-class airline suites.

iKozie Limited submitted plans for the site, near Cecil Road, at the start of the year in collaboration with Worcestershire-based Planning Prospects Ltd, who have played an instrumental role in getting the development through the process and approved, following consultation with the City Council and residents.

O’Donnell said: “This is a historic day for the city of Worcester. The approval of the first iKozie community will draw a lot of attention from around the country and Worcester City Council is to be congratulated for its vision in supporting this innovative housing scheme.

“It hasn’t been an easy road to get here as we have revised the plans to ensure the council’s view and the thoughts and concerns of residents near the development have been taken into consideration.

“We also acknowledge the work of Councillor Jabba Riaz for playing a key role in organising productive consultations with residents before he became Mayor of Worcester.

“Now that the plans have been approved, we will begin the process of preparing the site. We expect the major work groundwork to begin in spring 2019 and the first residents to be in by this time next year.”

Councillor James Stanley, Chair of the City Council’s Communities Committee, welcomed the approval for the iKozie development and what it will bring to the city.

“We are proud to support this application for more iKozie homes in Worcester,” said Cllr Stanley.

“This is a much-needed and innovative housing solution, which will help more people in the city to live independently while also benefiting from being part of a wider community.”