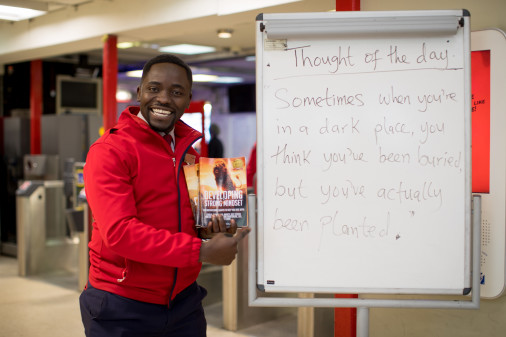 A Virgin Trains employee has been motivating passengers at Crewe Station with a selection of self- penned motivational messages.

The inspirational quotes are regularly shared by Virgin Trains Welcome Host, Aaron Koduah, on the notice boards at the station – which has become popular with passengers.

He has now published a book, entitled ‘Developing a Strong Mindset: 500 Motivational Quotes That Are Designed To Help You Through Bad Times’ which is on sale at Amazon.

He joined the Virgin Trains team in 2015 and began sharing his own words-of-wisdom and some more famous quotes on the notice boards at Crewe station in January 2016. They were an instant hit with passengers on the route.

Previously Aaron, 38, served in the British Army for seven years with the Royal Logistics Corp with tours in Afghanistan and parts of Europe after moving to the UK from Ghana. During his time in the army Aaron sought comfort and drew strength from words of wisdom.

He explained: “I’ve always loved a good quote and would often search online for motivational quotes to help me get through darker times. I began writing down my own quotes which I shared with friends and family on social media and eventually on the boards at the station.”

Customers began to photograph and tweet the notice boards, thanking Aaron for brightening their days.

“I was really chuffed when I began receiving positive feedback from people and felt proud that my own words were now helping others through their bad times,” he said.

“The reactions from customers has been overwhelmingly positive. The idea for the book actually came from people asking me where I get my ideas from and if I could compile them for future reference.”

Now the book has been published, customers are getting their copies signed at the station by Aaron.

“If I can help just one person to develop a stronger mindset, my goal is achieved,” he said.