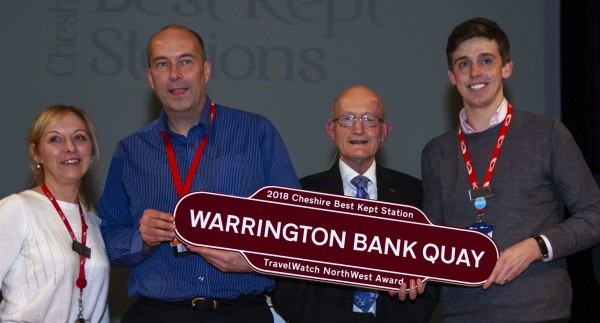 Crewe Station was highly commended for the ‘World Wall 1 Centenary Award’ for a commemoration of the Jellicoe Express trains that took naval personnel from London to Thurso.

Over 2,500 people visited the station to see the only surviving Stockport tramcar, vintage Stockport corporation buses, modern diesel locomotives, and railway themed exhibitions and displays, all while the station operated a normal Saturday train service.

The Victoria Cross won by Stockport railwayman Wilfred Wood was displayed and an art display, illustrated talk on local steam and a civic reception took place at the nearby Art Gallery.

Darren Horley, Head of Commercial (Stations & Operations), said: “We’re challenging traditional views of station management so that they’re not simply places to pass through when travelling but are at the heart of the communities they serve.

“We’re delighted that three of our stations have received awards and would like to thank the organisers who deserve credit for showcasing some of the great work that is taking place at stations throughout Cheshire.”

The Awards were presented before 160 guests at The Grange Theatre, Hartford, Northwich by Professor Garfield Southall, Dean of Science and Engineering at the University of Chester and Chair of North Cheshire Community Rail Partnership. The evening was also supported by Her Majesty’s Lord-Lieutenant of Cheshire and twelve mayors from boroughs, town and parishes across Cheshire.

On presenting the awards, Professor Southall said:“It has been a great pleasure for me to present these awards this evening and it has been an eye-opener to see how much volunteering there is on our railway stations in Cheshire. My thanks go to all those Friends Groups and rail staff that make our stations lovely gateways to our cities, towns and villages across the county.”