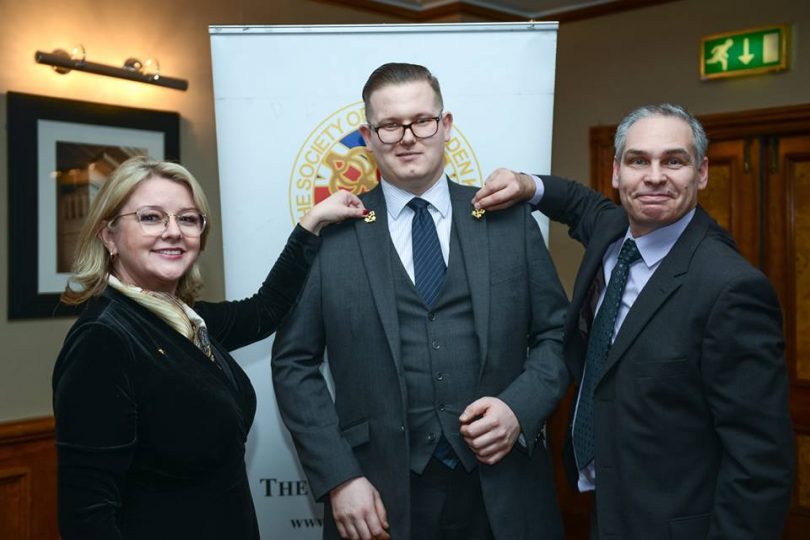 Joe McGinn, head concierge at East Sussex-based Ashdown Park Hotel & Country Club, has been honoured by being accepted into The Society of Golden Keys of Great Britain, at a ceremony in Marble Arch on Friday, 8 February.

At the presentation of the coveted ’Les Clefs d’Or’ badge, produced exclusively by Swiss jeweller Bucherer with the iconic design of two crossed golden keys, Joe was joined by colleague concierge Phillip.

General manager of Ashdown Park Hotel, Ben Booker, commented: “I am thrilled that Joe has gained his Golden Keys and been recognised by his peers across the industry for his dedication and commitment to our guests. The concierge team are an essential part of the Ashdown Park experience and Joe has a true passion for leading and developing his team to ensure they wow our clients at all times. Nominating Joe was clearly an easy decision and a natural step in his chosen career.”

Taking inspiration from France’s Les Clefs d’Or (The Golden Keys), The Society of Golden Keys of Great Britain was founded by a group of head hall porters from some of London’s leading hotels in 1952. The Society is a membership body offering concierge professionals excellent networking, educational and social opportunities, in both the UK and internationally. An elite fraternity, members of the Golden Keys are globally connected, committed to professional development, and motivated to set new standards for the very best guest service.

Joe started at the country house hotel at the age of 17, originally as a stop-gap before moving on to music college. However, his passion for customer service shone through and it soon became Joe’s main ambition to obtain the Golden Keys. After 11 years of service at Ashdown Park, general manager Ben Booker and David Roby of The Grand Hotel, Eastbourne, initiated Joe’s membership into The Society of Golden Keys.

As a general manager, Ben Booker was able to recommend Joe to the society, along with current Golden Key member David Roby from The Grand Hotel, Eastbourne. Joe was then interviewed and tested by a panel, comprising of committee members and honorary life members. The entire membership was then consulted for approval, before Joe was successfully welcomed into the organisation.

Aidan, Joe’s direct line manager added; “I’m very pleased for Joe and proud of him for finally becoming a member of the Society. I was a member for over 10 years when I worked in the concierge team here at Ashdown Park Hotel and had always been extremely keen to help push Joe into becoming a member himself. Once he was ready, I felt he would be a perfect candidate for the Golden Keys as he is an excellent concierge, is so passionate about his job and providing our guests the very best levels of service. Being a member will now also help him in his role by giving him an international networking database of the best concierges in the world.”

Commenting on what the Golden Keys and his role at Ashdown Park means to him, Joe said; “My first week was spent training with Aidan Smith and I remember one of the first questions I asked him was about the gold lapel pin he was wearing. Finding more out about the society progressively made it my main ambition to become a member and obtain my Golden Keys.

“There aren’t many people that have the view from their office windows that I have, the friendship and support from team members and colleagues, or as varied a day-to-day job role as we have as concierges.”