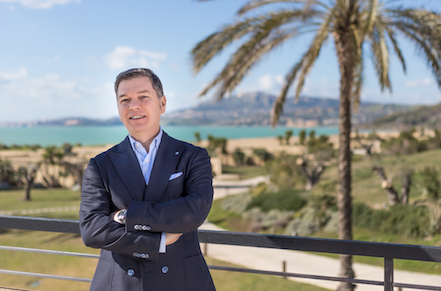 Experienced international hotelier Giacomo Battafarano has returned to Sicily and been named as the new General Manager of Verdura Resort.

Battafarano, born in 1974 and originally from Matera, brings a wealth of knowledge with him to the iconic Sicilian resort – a Rocco Forte Hotel – which is celebrating its 10th anniversary this year.

After gaining a Master in Hospitality Management qualification at the LUISS School of Business and Management in Rome, Battafarano began his career in the luxury hotel industry with a five-year spell as Hotel Manager at Forte Village Resort. From Sardinia he moved to Portugal, where he held the position of Operations Director at Le Meridien Dona Filipa and San Lorenzo Golf Course.

He returned to Italy at the historic Hotel Imperiale in Taormina, where he oversaw its reopening after a complete renovation, while, in his most recent role, he spent five years managing London’s Xenia Hotel, which included supervising the total rebranding of the Kensington property.

“I am proud to be joining the Rocco Forte Hotels team and, in particular, to manage the Verdura Resort, a resort that has positioned Sicily among the most sought-after luxury destinations for international clients. It is particularly exciting to come back to this marvellous land, which hosted me in the past and which remains close to my heart,” said Giacomo Battafarano.

Sir Rocco Forte, Founder and Chairman of Rocco Forte Hotels, added: “We are very happy to inaugurate 2019 by welcoming Giacomo. I am sure that his experience will allow us to achieve great results in an exciting year for the property and Rocco Forte Hotels.”

The appointment of Battafarano is part of an unprecedented moment of expansion for the Rocco Forte Hotels group which, in May 2019, will inaugurate its first property in Puglia – Masseria Torre Maizza in the province of Brindisi – and second property in Rome, the iconic Hotel De La Ville a few steps from Piazza di Spagna.

Overlooking a private beach bordered by the turquoise waters of the Mediterranean, Verdura Resort is ready to welcome guests. Ad hoc solutions for family stays and offers dedicated to golf enthusiasts are available HERE.
www.roccofortehotels.com/verdura-resort