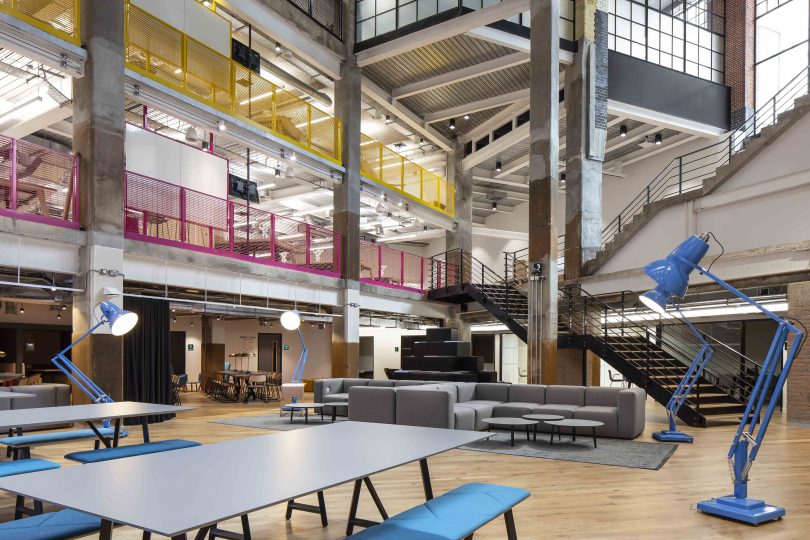 Originally it was the print HQ for The Daily Mirror. After that it was famously used as the backdrop for photoshoots featuring The Rolling Stones, when it was as an artist’s studio. Now Herbal House in London has become the UK office for online greeting card company, Moonpig – and air terminal devices from Waterloo Air Products plc were fitted as part of the 4-storey office refurbishment.

Celebrating its industrial past, the stunning red brick 1920s warehouse has become the new focal point in London’s high-tech district. It has been sensitively re-designed and refitted with one aim in mind – to maintain the original materials and features, as well as preserve the iconic building which has played so many roles in its long life.

Nick says: “I feel really proud to have been part of this refurbishment. It is such an impressive building and it was great to watch it take shape.

“We used swirl diffusers in a mill finish from Waterloo for the main part of the project which celebrated the industrial heritage of the building. In an open plan office, it’s vital for good air circulation, Waterloo’s swirl diffusers are designed to produce radial air patterns to nearly two meters and offer excellent air mixing.

“To keep in line with the interior styling, airline linear grilles were supplied in white aluminium. They look impressive as they can be installed in long continuous runs and offer a horizontal projection of air.

“Cleverly, the building was really opened up and stripped back to the original materials in a bid to maintain the unique character of the building. The brickwork was exposed, and it created an inviting, airy and spacious working office. From start to finish, it was an exciting project to watch develop and be involved with.”

The new design has been influenced by its location and has revived one of London’s most recognisable buildings of industrial architecture.

Herbal House, which is located in London’s hub for digital, design and creative business, now provides a unique and central workspace for Moonpig’s (Photobox) UK operation. But that’s not all. A global design firm has agreed a new lease and a leading rail company is about to move in.

Ben Connelly, contracts manager at Conditioned Environment Mechanical Services Ltd, says he always likes to use Waterloo products on projects. Ben adds: “Herbal House was such an amazing job to be involved with. It was exciting to be part of providing such an iconic building with a new lease of life.

“The building is so iconic, and it was such a blank canvas, I was looking forward to seeing it finished.

“Initially, we planned for all the work to be completed in four months, but we actually did it in three. As always, the team at Waterloo were a pleasure to work with.”