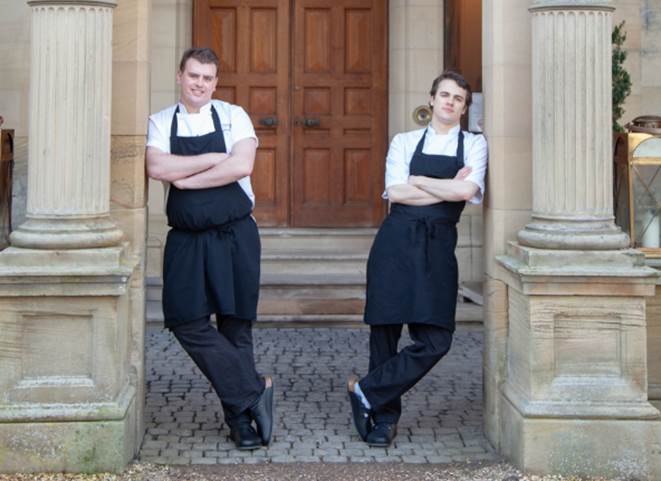 Palé Hall is delighted to reveal that Head Pastry Chef, Adam Cleal alongside his colleague Sam Widnall, will be appearing on this year’s Bake Off: The Professionals, with the first episode airing Tuesday 30th April on Channel 4.

The pair are the only Welsh contestants to take part in this year’s series, which will see twelve teams of two super skilled professional pastry chefs pair up to compete in a series of baking challenges. Contestants work for some of the United Kingdom’s top hotels, restaurants and businesses. From intricately designed miniatures and showpieces such as tarts and cakes, the teams use all their skills to produce a variety of delicious desserts with the goal to being crowned winner of this prestigious competition.

Palé Hall owners Alan and Angela Harper along with the rest of the team wish the dynamic duo the very best of luck.

Follow their progress every Tuesday at 8pm on Channel 4.

About Adam Cleal
Adam started at Palé in 2016 before leaving to work for Michael Caines at Lympstone Manor. He returned to the kitchen last year where he has taken the title as Head Pastry Chef. Adam is always pushing himself and loves the challenge. When Adam allows himself to relax, he enjoys visiting family back home and walking the dog with his partner.

About Sam Widnall
Sam joined the Palé Hall team in June 2018 from the West Midlands, and aside from his passion for cooking he’s a huge IT enthusiast. Profoundly deaf, Sam hopes that his experience will encourage and inspire others to follow their dreams.

About Palé Hall
The five-star Grade II* listed Palé Hall is one of the finest country house hotels in Wales and the UK. Owners Alan and Angela Harper have lovingly restored the historic house to its former glory, creating a peaceful and luxurious retreat surrounded by the natural beauty of the Welsh valleys on the edge of Snowdonia National Park. Palé Hall holds five AA Red Stars and three AA rosettes.