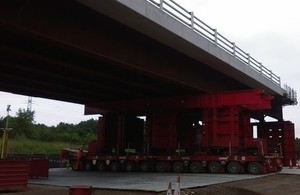 A huge new motorway bridge will be lifted in to place over the M27 near Southampton this weekend.

The new bridge weighs 1,069 tonnes – as much as 15 space shuttles – and will be lifted into place using self-propelled modular transporters, which are remote-controlled, self-powered low-loader lorries. These lorries will lift the bridge into place from the carriageway.

The bridge was built in a compound near to the motorway. Building the bridge offsite and moving it into its final position saved what would have been months of overnight closures of the M27. The bridge deck is 47 metres long and is 16 metres wide.

The work is part of a Highways England project to replace the bridge that carries the A3057 Romsey Road over the M27 northwest of Southampton and is the second of three weekend closures allowing the old bridges to be demolished and the new one installed.

The M27 between junction 3 (for Southampton City Centre) and junction 4 (for the M3) will be closed from 10pm on Friday night (28 June) and will reopen at 5am on Monday 1 July.

Highways England project manager Andrew Winson said: “The installation of the new Romsey Road bridge marks a major milestone in this scheme and is the next step towards opening a brand-new bridge for people in the area and users of the A3057. Our approach to replacing this bridge has meant that we can avoid months of disruption on the M27 and carry out the big operations over three weekends, spread out over time. But, while this means less disruption overall, closing the M27 will inevitably cause disruption this weekend, so I strongly urge drivers to plan ahead and avoid the area if possible.

“The weather is expected to be very warm this weekend, so if travelling by car, please take some extra water on your journey just in case the diversion routes are busy, which they are expected to be.”

This work has been carefully planned and agreed with local authorities and emergency services. While the motorway is closed, Highways England will also carry out routine maintenance, such as barrier, technology and drainage work, avoiding the need for future roadworks.

Fully signed diversion routes will be in place throughout the weekend, with separate routes for heavy vehicles.

The Romsey Road bridge is being replaced because it is nearing the end of its life. Two narrow older bridges are being replaced with a single new one, designed to last 120 years. Work started in September last year when the first of the two old bridges was demolished, with traffic on the A3057 directed over the other bridge. With the new bridge in place, work will begin to get the new bridge ready for traffic, and the final remaining old bridge will be taken down in another weekend’s work expected to happen towards the end of the year.

Anyone interested in being kept up to date with the scheme can visit our scheme web page or email info@highwaysengland.co.uk.