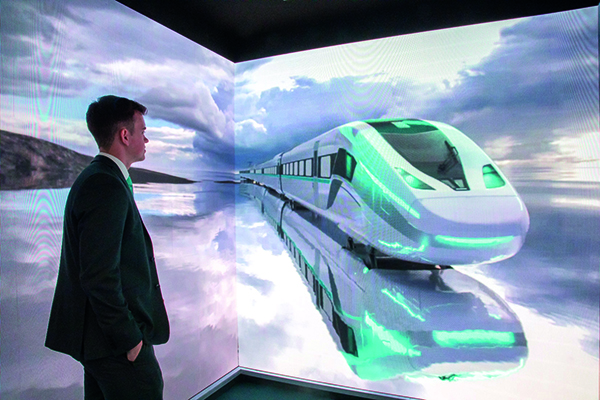 On its 14th and latest edition, Railtex has once again proved it is the UK’s premier exhibition of railway equipment, systems and services. A total of 6,700 visitors from 50 countries and almost 2,500 professionals representing exhibiting companies gathered at the event at the Birmingham’s NEC.

The venue was transformed with a huge amount of technology, skills and services at some of the most eye-catching displays of the 420 exhibitors from 22 countries. The show also featured a comprehensive supporting programme of speeches, presentations and discussions. Innovation was showcased, leads created and business partnerships formed over three engaging days.

It is fascinating time to be part of the rail industry in the UK and this year’s event really defined that with numerous success stories and the overall buzz around the exhibition. Recent analysis by Oxford Economics, commissioned by the Railway Industry Association, showed that rail generates £36 billion in economic growth and £11 billion in tax revenue each year, whilst employing 600,000 people. It is a major industry and from the evidence of those at Railtex 2019, it is an industry in safe hands.

“Railtex has developed a reputation as a UK trade show leader for the rail supply industry, showcasing a vast range of products and services from across the sector. This year was no different, with Railtex once again bringing the industry together for three packed days of networking, discussions and events.”

Beyond the main exhibition, Railtex 2019 brought together a host of experts to deliver keynote speeches and seminars, presentations and discussions with leading industry figures. Among those was Gordon Wakeford, Managing Director of Siemens Mobility and Co-Chair of the Rail Supply Group, who explained how the Rail Sector Deal is based on four pillars, which together will transform the UK’s rail industry for the better – Digital Railway, Data, Sustainable Railway and Exports.

The comprehensive supporting programme included the Seminar Theatre, featuring a range of interactive forums, topics and discussions, and the Knowledge Hub, which hosted a selection of project updates and industry briefings. Among speakers were Network Rail’s Managing Director for the Group Digital Railway Stuart Calvert, who spoke on Devolution and the Digital Railway; HS2’s Supply Chain Manager Robin Lapish, who discussed supply chain opportunities on the landmark project; and Clair Mowbray, Chief Executive at the National College for High Speed Rail (NCHSR), who was speaking on the topic Taking Action on the Skills Shortage in the rail industry.

Railtex 2019 also featured a brand-new Future Focus Conference, bringing together a whole host of speakers to cover the key challenges and opportunities that UK rail will face in the coming years. This included; keynote addresses from Crossrail 2’s Head of Commercial and Controls, Simon Adams; Digital Railway’s Head of Strategy, Franchising & Sponsorship, James Drury and a lively Q&A with the Rail Minister Andrew Jones MP.

During his speech at the Future Focus Conference on the second day of the show, Rail Minister Andrew Jones MP stressed the requirement for 50,000 new workers by 2033 to replace retiring workers and explained that the industry needs to adapt to changes in technology. He also issued a call for more digital skills and workforce diversity in the rail industry.

Digital Rail brings much discussion around the industry, with Network Rail looking to create more capacity on an increasingly crowded network by modernising systems and adapting new technologies and innovations. The UK government has earmarked £450 million specifically for digital railway schemes, as part of an almost £48 billion investment in maintenance, modernisation and renewal of the rail network by 2024.

The digital age was placed under the microscope at Railtex 2019, with the Birmingham Centre for Railway Research and Education presenting its Digirail project, which supports organisations working in the industry’s supply chain.

There was also a busy panel discussion at the Future Focus Conference entitled ‘Digital Journey’ featuring key members of Network Rail’s Digital Railway programme, discussing the challenging and opportunities that lie ahead for the programme.

As the rail industry moves towards a digital future, companies are increasingly looking to utilise data to identify potential cost savings and manage maintenance issues in real time. Exhibitors at Railtex were keen to showcase their solutions, with California-based software company ETAP presenting the eTraX Rail Traction Power system, which utilises advanced geospatial asset information to allow for the modelling, simulation, prediction and optimisation of rail infrastructure.

The ‘Internet of Things’ (IOT) has been the driving force behind reliable passenger connectivity and this was proudly demonstrated by Nomad, the pioneer of the Intelligent Train – a shared and secure network infrastructure that allows on-board systems and passenger devices to connect and interact, improving passenger satisfaction and increasing operational efficiency.

Despite being seen as a low-carbon, environmentally-friendly way to travel, the rail sector is striving to remain the leader of sustainable transport – as was evident at this year’s Railtex.

A big hit with many visitors was Alstom’s exhibit, that presented its model of its hydrogen train design Breeze, emitting only water and no harmful emissions at all.

Econpro WDS Ltd (DuraKerb) also showcased how it transforms waste into sustainable construction products and solutions for use on the railway.

Railtex will return to the NEC in May 2021. There has already been very strong demand for stand space. Following the success of the show, over 100 companies have confirmed their participation in Railtex 2021, with 30% of stand space already reserved.