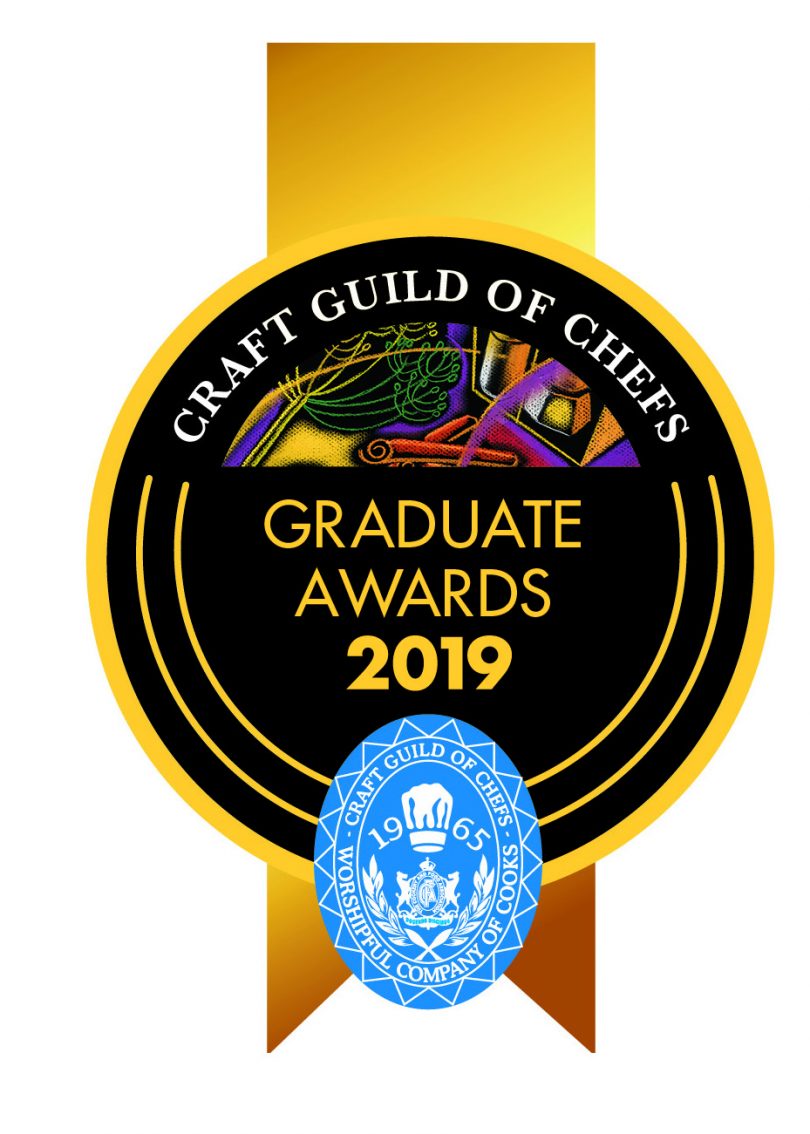 After being the ‘Highest Achiever’ at last year’s Craft Guild of Chefs Pastry Graduate Award, Ieuan Davies from The Manor House Hotel is the first ever chef to do the double as he’s taken the top spot in this year’s Kitchen exam. The results were unveiled in front of over 150 guests at an awards presentation held at The Landmark, London on Friday, 6th September 2019.

Seven chefs passed the Graduate Award this year with Joshua Rooney from Petrus, Ashleigh Hellowell at The Royal Garden Hotel and Angelica Kainth from Fenchurch Restaurant all achieving the Kitchen Award, alongside Ieuan. Kate Mudge from Pennyhill Park Hotel and Spa, Thomas Bayliss who works at Le Gavroche and Charlotte Bonham from The Pig made the grade in the Pastry Award. The Highest Achiever Award in Pastry was presented to Kate Mudge.

The Graduate Awards are open to kitchen and pastry chefs, aged 23 and under. Taking part in these annual awards provides the opportunity for young chefs, who are now in the workplace, to develop and test their culinary skills.

For the kitchen final exam, the chefs started with a paper assessment to test their knowledge on culinary skills and the wider hospitality industry. For the fishmongery test they had to prepare two whole lemon soles, presented as fillets and in the butchery challenge, the chefs prepared a short saddle of lamb on the bone. Later that day the chefs used the lemon sole for the classic test where they had to make a Paupiette de Sole Duguesclin. The chefs could choose what to cook, to accompany the saddle of lamb, when they saw the ingredients in the mystery basket. For the dessert, all chefs were challenged with making a Vegan Chocolate, Coconut and Mango cake following guidance from Andrew Ditchfield, head pastry chef at the House of Commons.

In the Pastry Kitchen, the finalists had to make an Apple Strudel and Crème Anglaise, macarons suitable for a summer afternoon tea finished with tempered dark chocolate decoration, moulded chocolates with two different layers and Pâte de Fruits. Chefs were also marked on their work processes including health and safety and wastage.

Steve Munkley, founder of the Graduate Awards and Vice-President of the Craft Guild of Chefs said: “This year’s exam saw some excellent fish preparation, with the butchery still challenging their skills and the classical starter proving a difficult task for many. The mystery basket of ingredients, prepared by Russell Bateman, allowed chefs to show us their own ideas on how best to use the ingredients alongside the lovely saddle of English lamb. The examiners tasted a wide range of dishes with some outstanding cooking on show. We saw a huge improvement in desserts across the board with Andrew Ditchfield even commenting that a couple of them were as good as he could have made them. Well done to all the finalists, some of whom were working in a small space. It isn’t easy in a different kitchen environment, but many turned out some stunning work.”

Commenting on the Pastry Award, Chair of Examiners, Will Torrent said: “When I set this year’s brief, I wanted the finalists to show us their creativity as well as classic skills and they rose to the challenge. We saw some fantastic working practises with so much focus in the kitchen throughout the five hours. The Graduate Awards showcase the best of young talent and what I love about them is how we take chefs on a journey. There is always a change in the chefs from the semi-final to the mentor day and then the final, and to see their creativity in this exam was really exciting for me as head examiner.”

At the presentation night an award was also presented to a mentor who has supported a young chef throughout the process. This year that went to James Key from Barnsley College who helped finalist, Rhys Inmon.

For 2019, all the chefs competing in both the kitchen and pastry award were treated to an inspiring two-day mentor experience in the Cotswolds. It included a tour of Daylesford Farm, Shipton Mill, Upton Smokery, gin tasting at Cotswolds Distillery and delicious food from start to finish, as well as a number of masterclasses from industry experts.

Russell Bateman is the Chair of Examiners for the Kitchen Graduate Award and he told us: “I love to watch the young chefs develop. It’s great to see the level they are at when they meet us and compare that to when they present their dishes in the final exam. We see progress and change in every single finalist, not only in their cooking but in their mindset too. A lot of this is down to the mentor trips and masterclasses the chefs are exposed to as part of the whole Graduate Awards experience.”