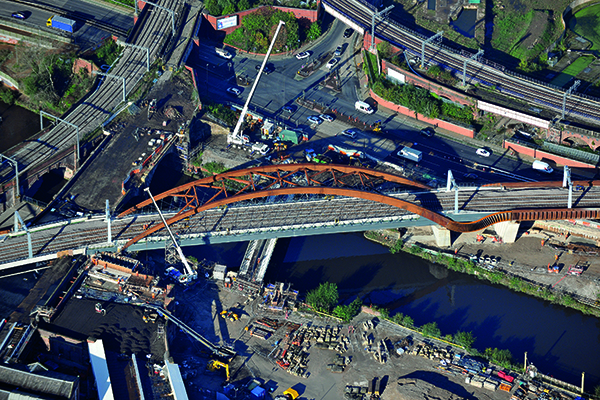 The RIBA National awards celebrate the best buildings in the UK, recognising innovation and a project’s contribution to architecture.

Manchester’s main city centre stations were not previously connected directly by railway lines and the existing railway lines were running at full capacity during peak times. The Ordsall Chord was proposed to connect the stations to help reduce congestion and open up new routes for passengers.

Creating these connections sounds simple on paper – installing 540m of track near Ordsall Lane to the south west of the city.

But in reality, building the Ordsall Chord required realigning existing track, building new bridges and viaducts, removing redundant structures and restoring others – all while working near a live railway, roads and a river, heritage structures, local businesses and the public.

Connecting the two bridges which form the Ordsall Chord is a transition piece linking the 2.2m deep girder of the network arch bridge and 2.8m deep girders of the Trinity Way Bridge.

Hexagonal in cross-section and with a complex geometry, this element was analysed and modelled in 3D to aid design, fabrication and erection.

Building information modelling (BIM) was used to understand the interaction of new and old structures on this project, incorporating all major structures and foundations and buried services. This aided coordination of all disciplines on this project from an early stage.

Commending the project, RIBA National Awards judges said, “This project comprises a series of viaducts, bridges and public spaces that link rail services across northern England to provide new routes for passengers and unlock bottlenecks in the system. The final project brings local delight with the striking form of the new river bridge and a strong identity through its materiality and consistent detailing.

“The architect’s challenge was to create a series of cohesive places with an overriding requirement to clear the path for the new rail route.

areas created adjacent to them to celebrate their character and importance, creating accessible and versatile urban spaces.

“The application of concept through to detail is consistently high. Each element and space touched by the project has been carefully considered. What could have been mundane has been lifted by the application of thoughtful strategy, consistent design language and a care in detailing that responds to the context of each element.”

The efficiency of the network arch bridge also meets the architect’s aspirations for an elegant structure, with all necessary performance characteristics for the railway.

As part of the works, a new public realm was created to reveal the area’s rich industrial heritage. Elements of this were seen in their full glory for the first time in over 150 years.