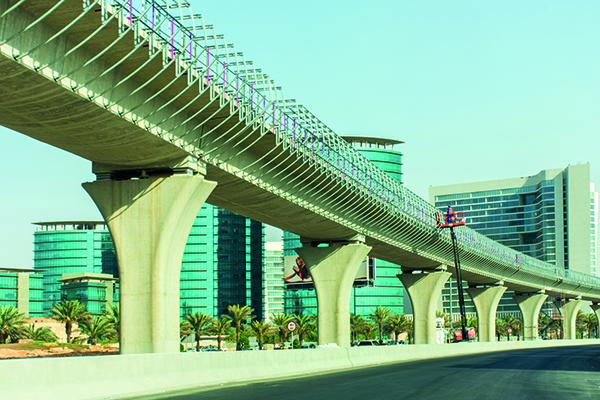 Across vast areas of the desert, the Saudi Arabia Railways Company (SAR) plays a key role in connecting communities, bringing people closer, creating new jobs and investment opportunities in a growing economy in Saudi Arabia, which occupies a strategic position linking the eastern and western parts of the world.

SAR is connecting various cities and industrial facilities in addition to the main ports of both the Arabian Gulf and the Red Sea.

The railways support the mining industry, linking the northern and central regions with the eastern region through providing integrated transport solutions covering passengers and goods of all types along with heavy transport of minerals, petroleum and petrochemical products.

When the railroad was born it was an age of transformation in the history of the country – oil was newly discovered. The founding king, Abdulaziz Al-Saud, may God have mercy on him, ordered the construction of the first railroad between Dammam and Riyadh in 1947.

The late king was aspiring for a prosperous economy based on modern means of transport. Now, the Saudi Arabia Railways Company (SAR) is leading the development of the country, guided by the government of the Kingdom of Saudi Arabia.

This line (Dammam – Riyadh) was the first pillar of the Saudi railway network, which is now one of the longest railway networks in the world, connecting a country of more than 2.149 million square kilometres in a strategic location in the Arabian Peninsula.

Since the launch of its first line in 1951, the Saudi railway network has undergone many stages of development and progress until SAR was established in 2006. In 2016 the company was been announced as the owner of infrastructure for intercity railway projects.

In February, the Saudi Council of Ministers decided to transfer the assets of the Saudi Railways Organization (SRO) to SAR, so all assets be under one administrative system.

According to the decision, SAR now owns all operation assets, fixed operational and movable, in addition to the infrastructure of all railway transport projects between Saudi Arabia’s cities. This includes the existing railway between Riyadh, Dammam, and the dry port in Riyadh, and the Haramain High Speed Railway.

It also includes the North-South Railway project, which will contribute to the sustainability of this important sector and support its expansion while enhancing performance efficiency through optimum utilisation of assets, standardisation of procedures and policies to serve passengers of the railways as well as the development of operational and support services.

The growing boom witnessed by the Kingdom over the past decades has placed it at the forefront of the economies of the region in terms of growth, stability and output, making it (with the natural resources) a destination for jobs and a fertile ground for various types of investments and development projects.

The steady increase in population and the expansion of development and economic projects, have created the urgent need to strengthen the transport sector by finding safe, environmentally friendly and reliable solutions and alternatives in terms of their capacity and their ability to meet current and future needs.

Railroads have been one of the most effective and efficient solutions to support the industry and development of the Kingdom, considering the huge capacity and reliability it provides and maintaining the highest standards of safety.

The Saudi rail network now includes three lines: the North-South Railway (NSR) at a length of 2,750 kilometres, the Riyadh-Dammam (RD) line at a length of 733 kilometres, in addition to the Haramain High-speed Rail (HHR), the fastest rail in the region with a speed of 300 kilometres per hour, capacity of 60 million passengers per year, and at a length of 449 km.

SAR employs all the latest technologies available for passenger and freight service. It is striving to increase reliability and punctuality, which are essential for passengers and shipping. It also considers improving the safety of passengers, employees and cargo, a key issue in its services.

SAR leads the development process in Saudi Arabia, transporting thousands of people to their jobs and work every day, as well as transporting materials and materials to factories, not neglecting the environmental and educational aspects, as well as their direct contribution to increasing employment rates and thus eliminating unemployment.

The number of passengers who have been transported on SAR’s lines last year exceeded 335,000 passengers, an increase of 131% compared to 2017. The number of trips increased to 928 trips with a growth rate of 56.5%. The total distance travelled by the company’s trains reached 514,000 kilometres, Compared to 2017.

Railway freight shipping occupies a distinct position in SAR’s services because of its positive contribution to supporting the overall economy in various commercial, industrial and agricultural activities.

The revenues of the use of railways are based on several axes, including rationalisation of energy efficiency and protection of the environment. The freight shipping trains of minerals, goods and petroleum derivatives save 70% of the diesel fuel needed by trucks to transport the same quantities of goods, in addition to protecting the environment by reducing the harmful emission rates of transport engines at a rate of 75%.

In terms of developing the mineral transport fleet, SAR’s CEO AlMalik said that there is an agreement signed with US company Greenbrier that aims to supply and manufacture a new and advanced generation of railcars equipped with advanced safety systems to support the project of the city of Waad Al-Shamal, which is an added value for the mining and petrochemicals sector in particular, and for the national economy in general.

SAR is playing a prominent role in supporting the progress of the nation and diversifying sources of income that would create new and promising opportunities for the national young generations and achieve the principle of sustainability for the future of this sector at large.