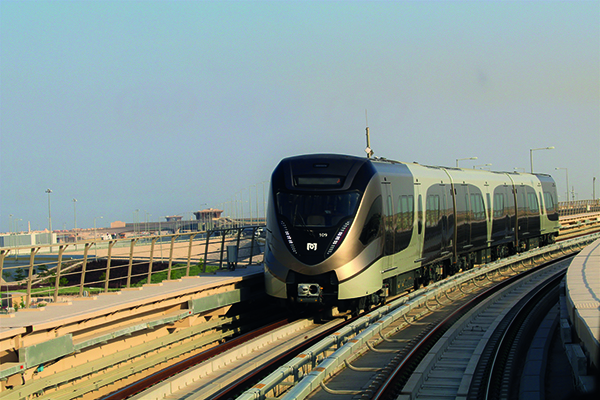 Established by Emiri decree in 2011, Qatar Rail was given the mandate to design and develop the country’s rail network.

The Doha Metro is the most prominent project so far for Qatar Rail. When fully complete the Doha Metro will serve both the capital and surrounding suburbs, with major locations all within easy and convenient reach.

Doha Metro is one of the fastest driverless trains in the world and will be the fastest in the region; able to reach 100 km per hour. In total, 110 trains – consisting of three cars, one of which will be for goldclub and Family Class and two for Standard class – will be delivered to Doha Metro: goldclub will have 16 seats, family 26 seats and standard 88 seats.

The metro system is being built in two phases. Phase one sees the construction of three of the four lines (Red, Gold and Green) and 37 stations. These three lines are expected to be open to the public by 2020. The second phases of works will involve the introduction of an additional line (Blue) as well as the expansion of existing ones. This second phase will add more than 60 additional stations and is expected to be completed by 2026.

Earlier this year, an important milestone for phase 1 of the works was reached when Qatar Rail commenced a preview service for the first part of the Red Line. The preview runs from Al Qassar in the north, to Al Wakra in the south and includes 13 of the Red Line’s 18 stations.

The launch, which was originally planned for 2020, comes almost one year ahead of schedule. It is an important stage for testing the Doha Metro system with passengers, providing an opportunity to evaluate and review the performance in preparation for the full operation of the network. During this stage, Qatar Rail aims to receive feedback from passengers that will help improve its services to provide the best possible customer experience, and will devote its efforts to making the necessary evaluations to meet the expectations of the public.

The preview service, which is launched ahead of schedule, is a testament of the tremendous efforts carried out by Qatar Rail’s executive teams and board of directors, as well as the continuous support of His Excellency the Prime Minister and the Minister of Interior, Sheikh Abdullah bin Nasser bin Khalifa Al Thani.

“Thanks to his continuous support and guidance, many achievements have been made ahead of schedule, and today we stand at a turning point as the project shifts from the development stage to the operational stage. The preview service is a major opportunity to measure the efficiency of the network and the services we provide. The outputs of the preview service are essential for us, and we will build on them as we prepare for the full opening of the network by 2020.”

“Doha Metro is considered one of the most important pillars of Qatar’s new integrated transport system. We invite everyone to experience the metro during this phase and to share with us their experience so that we can review the key factors that may affect our services in the future. We will develop solutions to address those factors to enhance the experience of passengers. It is also an opportunity for the public to get a closer look at the new transportation system, become familiar with it, and use it to help us build a customer base before the network is fully operational.”

In line with its continuous efforts to provide a comprehensive travel experience, and in cooperation with the Ministry of Transport and Communications, Qatar Rail has made preparations to integrate Doha Metro with other modes of transport, including feeder buses services that will take passengers to and from stations. It has also signed several partnerships with other service providers to transport passengers at a low cost.

The Red Line stations encompass a special architectural identity – that of ‘vaulted spaces’; a concept that reflects the heritage of the region by introducing open spaces that mimic traditional Bedouin tents. The design also uses ornamentations that shed light on the aesthetic elements and foundations of dynamic lighting and ventilation systems.

The station mock-up brings to life the tribute that the Doha Metro station designs pay to Qatari heritage through the use of traditional elements of Islamic and local art and ‘pearl-effect’ interiors. The colours of the Red Line stations interiors reflect the identity of the Red Line, also known as the coastal Line, as it runs along the coastal side of Doha.

The stations are air conditioned indoor stations. Each one contains a customer service centre, a goldclub office, a police booth, separate male and female prayer areas and restrooms that cater for people with disabilities. The stations also include monitors to display journey information and train services, as well as signage to guide the visitors. All stations are equipped with security cameras and a first aid room to preserve the security and safety of all passengers.