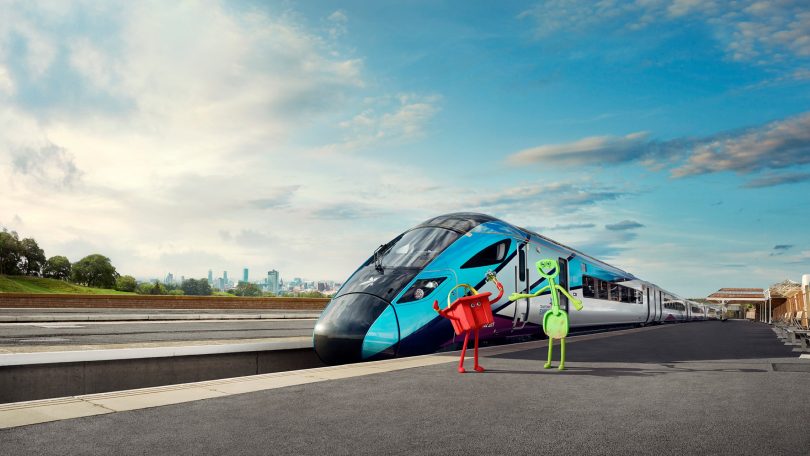 TransPennine Express (TPE) has launched a new advertising campaign to mark the introduction of their new state of the art intercity trains.

TPE is currently investing £500million into improvements on its network, including 220 brand new carriages that will all be in service by 2020, to transform customer journeys across the North of England and Scotland.

The new campaign is based around a number of unlikely characters, from a tea sipping torch to a red bucket on its way to the seaside, that are travelling across the North to be reunited with their complementary other half’s. The campaign is voiced by an all-star cast that includes Julie Walters, Ricky Tomlinson, Ross Noble, Jane Horrocks, and Ashley Jensen

Developed by creative agency; Engine and Directed by Joseph Mann, the campaign will include TV, radio, press and online promotional activity to encourage people get together by train. The advertising campaign will run through until December.

Caroline Anchor, Head of Marketing for TransPennine Express, commented: “Our new campaign is based around how we help bring people together across the North of England and Scotland. And now with the introduction of our fancy new trains, with added capacity and the investment that we have made into our on-board experience, getting together has never felt better for our customers.

“We really love the characters that have been created for this campaign.  It was important for us to have a launch campaign with cut-through and scale to deliver our new news in an engaging and memorable way.”

Rob Carter, Client Managing Director for ENGINE Creative, said: “We always set out to deliver an idea with bucket-loads of warmth, charm. Ultimately the train is the hero, but it is the diverse characters who create the relevance, showing TPE’s ultimate role in bringing the people of the North and Scotland together”.

You can view the new TV advert here: https://tinyurl.com/TPEAdvert