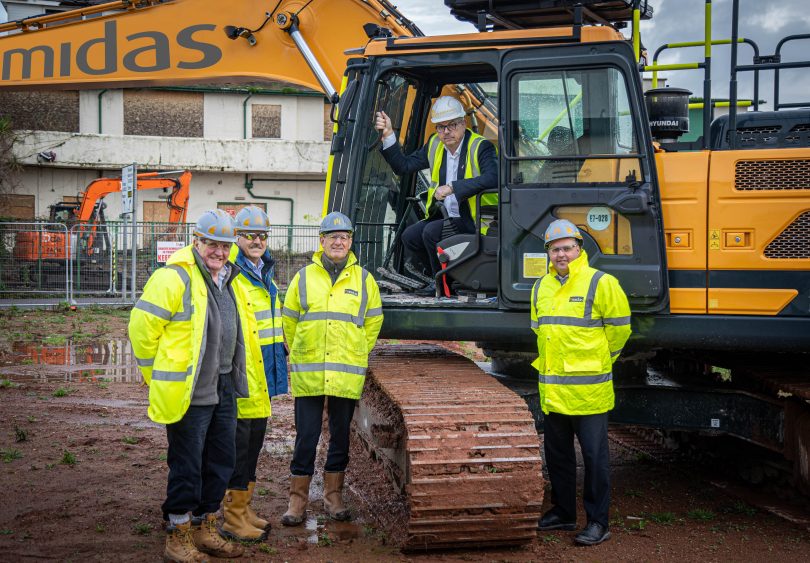 The signing of contracts to build two new hotels in Paignton marks the latest stage in the Fragrance Group’s multi-million-pound investment in Torbay.

The contracts, signed with Midas Construction, are to develop the sites of the former Park Hotel and Lighthouse club.

The sites, just a few metres apart on Esplanade Road on Paignton seafront, are two of the four acquired by the Fragrance Group in Torbay in recent years. The others are the sites of the former Palace Hotel and the old Corbyn Head Hotel.

Planning permission to redevelop all four sites was granted last year (2019) following the submission of plans by Torquay architects Kay Elliott, who specialise in hospitality and destination projects around the world.

Martin Rogers from Global Hotels Leisure & Consultancy Limited, on behalf of the Fragrance Group, said: “Together these two new hotels in Paignton will create more than 275 new bedrooms alongside a range of other facilities including restaurants, a gym and a spa.

“The signing of the contracts with Midas Construction is great news for Paignton and Torbay and a further sign of the Fragrance Group’s intent to invest £120 million in the bay’s future.

“We calculate that we are investing more than £30 million in Paignton alone which will translate into around 100 new jobs for local people and a major boost for the local economy. Torbay Council has estimated that guests at the hotels will spend almost £5 million a year locally.

“We are very pleased to have been able to appoint Midas. They are based in the South West of England and have a strong portfolio of major projects such as these.”

Midas Construction is part of the Midas Group, one of the UK’s largest independent construction and property services providers.

Mike Borkowski, Business Development Director for Midas Construction, said: “As a regionally-based business Midas is proud to be playing a leading role in many of the exciting projects under way to transform the built environment and economy of Torbay.

“We are delighted to have the opportunity of working with Fragrance Group in support of its major inward investment activity here and we look forward to bringing our experience in this sector and locally to the delivery of these important, high-quality hotel developments.”

Once completed, the two hotels will be operated by the globally renowned Accor group. The larger 161-bedroom hotel on the site of the Park will be branded as a Mercure, while the 117-bed hotel next door will be an Ibis Styles.

They will be the first purpose-built hotels in Esplanade Road on Paignton seafront for more than 100 years.