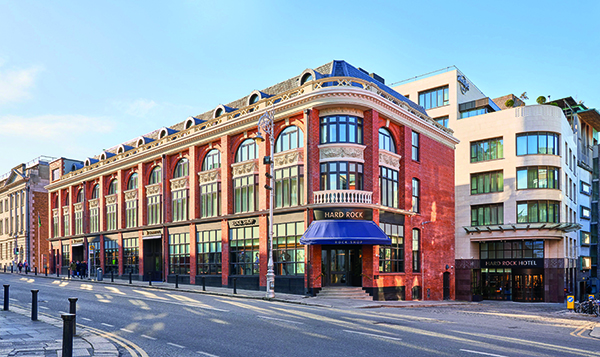 With a brand presence spanning over 76 countries, Hard Rock International continues its expansion in Europe with the opening of Hard Rock Hotel Dublin, which opened in late February. Located on Exchange Street Upper near the Temple Bar district, the hotel is a celebration of the rich cultural and musical history of Dublin, bringing Hard Rock’s signature music-infused vibes to the heart of the city.

PREMIER HOSPITALITY MAGAZINE spoke to Adrian Lambe, of Douglas Wallace, about their involvement in the design of the project.

How did you get involved with the Hard Rock Hotel Dublin?

“We had a relationship with the client, Tifco, and we had been involved in some interior design works on two of their other hotels in Ireland. We were always looking for a bigger project to do with them, and then the Hard Rock opportunity came up.”

What was the brief like? Was there much flexibility?

“The brief was to do the interior design for all the bedrooms, and public areas of the hotel. A few of the design team went over to Orlando to meet the Hard Rock Hotel team, to get a sense of their brand values and get a sense of what they wanted from the design. They’re not hard and fast about what they want in a scheme, it’s very much left to the local design team, but there are obviously certain elements they want included. For example, artwork and memorabilia is important to them, and they know what moods and feel they want to strike for. But really we were left with a blank sheet and we just started from there, without any constraints.

“We were dealing with two buildings, the Parliament Building, and the building behind it, which is called Fashion House – it was previously where all the rag trade was based in Dublin. And between the two buildings is an alley called Copper Alley, which is where the old coin mint was.

“So there was a lot of history and character to the site before we even got involved. What we wanted to do was to try and take historic elements and include them into the design. Copper seemed like the perfect thing to hinge our interiors on. When you start to look at the design you notice that there are bits of copper in all areas, and that’s just to ground it. When you look at Parliament Building in the bedrooms, you notice there are nods to historic detailing, whereas Fashion House is more modern, and more visually fashion orientated in how we picked materials and fixtures.”

How long did it take you?

“The feedback so far has been really good, people like the fact that every space is different. From the start we had the intention to have each space visually different, so when you go in and sit down there’s always something to look at, which marries with Hard Rock because there’s always a layer of memorabilia to focus on. If you came to the hotel, and saw something you liked, when you returned to the hotel, you’d see something different and that just keeps going and going.”

What were the challenges?

“There are always challenges when you’re working with an old building, we were mindful of everything that we were doing was respectful to the old buildings.”

Lastly, how important has it been for you to be involved in this project?

“It’s been amazing. Not to mention the fact that you learn so much from a project like this because of the depth of communication between client, contractor and the depth of detail, but it’s been important because it’s the first Hard Rock Hotel in Ireland. It’s just amazing to be part of something that has so much momentum and energy about it.”

A hotspot for tourists and locals alike, the hotel expands the capital’s restaurant and bar scene with Zampas, a South American-inspired eatery fusing authentic South American flavours with locally-sourced ingredients. True to its roots, the restaurant will be a music-filled entertainment hub, featuring live performances, DJs and expertly-curated playlists. Alongside Zampas, Constant Grind in the hotel’s lobby area serves light bites, homemade treats, speciality coffees and afternoon tea, winding down in the evening with craft beers and late-night cocktails.

To book your stay, visit: www.hardrockhotels.com/dublin. 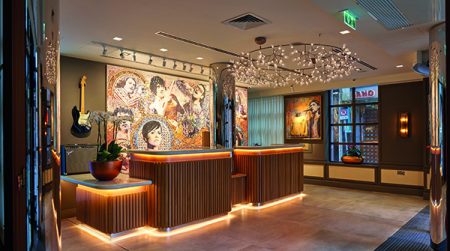 For two decades, Artisan Solutions has been a leading architectural and wayfinding signage specialist. We pride ourselves in delivering aesthetically pleasing products that both fulfil a function but also contribute in a positive way to the built environment.

We are a hybrid, one-stop shop that collaborates with brand owners, designers and architects to create powerful signage designs that we then implement in the most impactful and practical manner on site. We work with leading brands and organisations across five continents at all phases of the signage design and fabrication process.

Recently, we provided wayfinding and internal signage for the brand-new Hard Rock Hotel in Dublin. It was a very prestigious project. We were working on a listed building with a contemporary extension, so this was challenging for us. To see the signs in place and have a very satisfied client means a great deal to us.

Other venues we have been involved in include the Centre Point Building in London, Bord Gáis Energy Theatre in Dublin and VISUAL Centre for Contemporary Art. We have also worked on multiple Urban Outfitters retail stores throughout Europe.