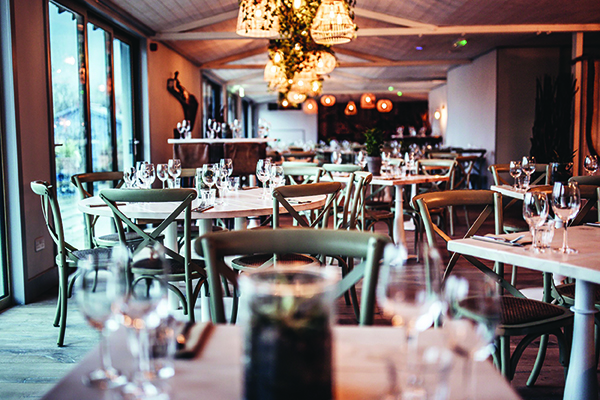 A stylish brand new bar and restaurant at the Peninsula Hotel, Guernsey, the imaginatively designed Bar du Nord is the nautical-inspired centrepiece of a wide-ranging refurbishment, also including the hotel’s reception and lobby areas.

The Peninsula hotel with 99 bedrooms is the newest addition to the family-run Little Big Hotel Group, and the second largest hotel on the island. It is perfectly situated in Les Dicqs, Vale, on the north end of the island, with the beach only footsteps away from the front door.

The hotel was purchased by the group in March 2018, and continued to run until January 2019, when the refurbishment commenced. It re-opened two and a half months later.

The main contractor and project manager for the refurbishment was Daryl Rix.

Little Big Hotel Group’s Director of Operations Charlotte Walker said: “The original interior was very dated and really needed a breath of fresh air. We stripped out the whole of the reception, lobby, restaurant and bar area to create the new interior. As a family, we came up with the design ourselves, with the concept being developed and refined as we went along.”

The Bar du Nord name was inspired by a former RNLI lifeboat, the Etoile du Nord, which was refurbished and is now on display outside the front of the hotel. The iconic eight-tonne boat was brought to the hotel with one and a half tonnes of water in it.

Although it will never float again, the engines are still inside and, with its original livery, it represents a significant part of the island’s history.

The interior space of the bar is lit by a large skylight, through which natural light floods, creating a bright, warm and welcoming ambience.

On entering the bar, the first thing that comes into view is the huge horseshoe-shaped wooden bespoke bar which incorporates a ceiling-height olive tree as a central feature. Another design highlight in this area is a double-sided glass-fronted wood burning fire with original Guernsey brick surround.

Seating is in a variety of designs, including bar stools, free standing chairs and booths.

Flooring is in a combination of dark and lighter stone slabs – a feature which also runs right through to the reception area.

The colour palette includes nautical-look blues and greys interspaced with occasional pops of bright colour, based on a combined beach-side/rustic theme.

Charlotte walker commented: “Lighting also plays a massive part in the design and includes around 150 pendants with large hessian shades, interspersed with large amounts of greenery, also suspended from the ceiling – and this has worked really well.”

Continuing the same colour palette, the restaurant features a reclaimed wooden floor, newly added wooden eaves and bi-fold doors which run the full length of the space and replace the original windows. Charlotte Walker said: “We just made a general effort to make the space lighter, brighter and full of character.”

A similar design theme has been carried through the hotel’s lobby and reception areas, using the same colour palette. A key feature is a green ‘living’ wall just inside the entrance, and the reception’s wooden panelled desk.

Charlotte Walker concluded: “Daryl Rix and his team did a very good job as usual – we use them on all of our projects.

“We couldn’t have been happier with the end result – it just couldn’t have been any better. Customers have been totally flabbergasted by the changes that have been made in the building before and after the project. This is going to become one of the stand-out places on the island.”

The Peninsula Hotel is located in the far North of Guernsey, sitting on a picturesque headland with a wonderful view over Grand Harve Bay from the front and a sheltered beach to the rear. 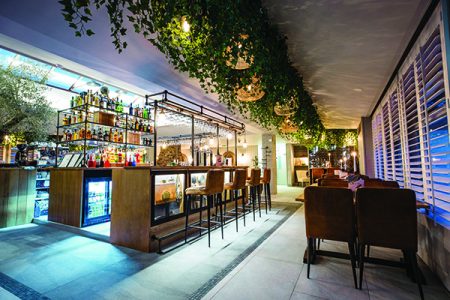