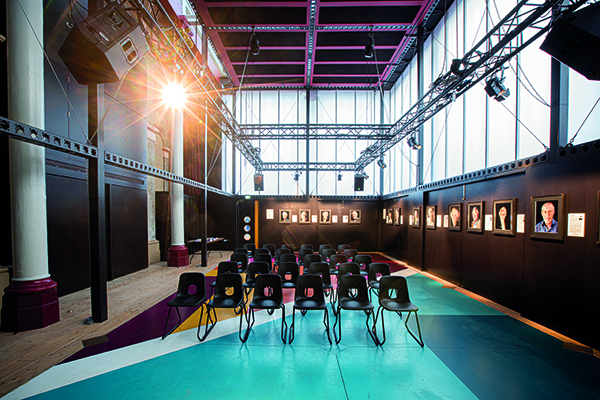 Alexandra Palace’s Creativity Pavilion opened in February providing a new home in the recently developed East Wing of the building for the charity’s Creative Learning programme. The programme uses the history of the Park and Palace and the arts to inspire people of all ages and backgrounds to develop new skills and boost their health and wellbeing.

The final result is a Pavilion which has the flexibility to be transformed and adapted for a range of activities; including interactive workshops for schools, music and theatrical performances, community-curated exhibitions, creative sessions for people with disabilities and family drop-in classes, such as Baby Jazz.

The upper levels of the space form a light box, whilst below a series of fixed and moveable panels enable the space to be enclosed from the rest of the East Court or opened up to become part of the larger space. The interior is equipped with a lighting rig and speakers which give a theatrical feel, whilst the new suspended ceiling and motorised curtain rail allows for the space to be darkened for projection. The Creativity Pavilion provides a welcoming, inspiring and modern fit-for purpose facility which contributes to the vibrancy of the newly restored East Wing.

Daniel Burt, Architect at Feilden Clegg Bradley Studio said: “The Creativity Pavilion is a flexible, inclusive space which will be host to a huge array of workshops, exhibitions and events for schools, families, young people, adults with disabilities and older people at Alexandra Palace. We wanted the space to communicate a sense of excitement, enlivening the East Court, and provide a welcoming and secure environment in which the Palace can expand their ambitious cultural and community programmes.”

The opening of the new Creativity Pavilion is another step in Alexandra Palace’s mission – along with the renovated Victorian Theatre, and the transformation of East Court – to repair, restore and maintain the Park and Palace for public recreation and enjoyment.

The official launch on Tuesday 25th February included the opening of a new exhibition called Little Inventors. This was the culmination of a year-long project that challenged children across North London to start on their own inventive journey, inspired by the innovative spirit of the adventures and aeronauts of who have appeared at Alexandra Palace over the years. Four winners were selected and their designers brought to life by redLoop, the design and innovation centre at Middlesex University, and were displayed in the Creativity Pavilion until 24th March.

Louise Stewart, Chief Executive at Alexandra Park and Palace Charitable Trust said: “We’re delighted to have opened the Creativity Pavilion. Having a dedicated and specially designed space for these activities means we will be much better placed to deliver creative activities to inspire people of all ages and backgrounds. It’s going to be exciting to see how this space will support the charity to benefit more people in new ways.

“The Creativity Pavilion also marks the latest phase in our restoration of the park and palace. To see how much this space has changed in the last few years is almost unbelievable, and we’d like to thank everyone who has worked with us to make this possible.”