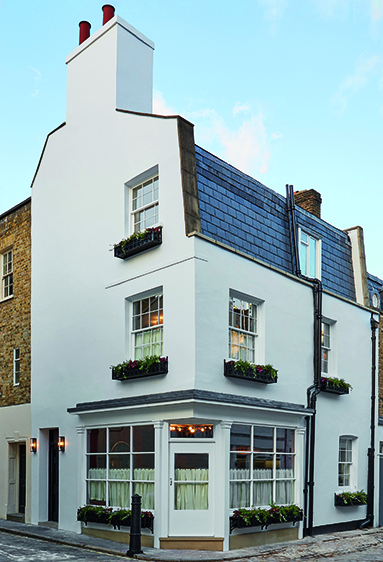 3 Interiors fitted out the new venue, which is split across two floors, with the open kitchens on each ‘inviting’ the guest to be immersed in the orchestration of the chefs and the execution of each dish.

The ground floor features a cocktail lounge and five counter seats overlooking the downstairs kitchen, whilst on the first floor, there are a handful of tables as well as kitchen counter seating for a further six, ensuring a front row dining experience for all.

Tom has worked closely with Rebecca Körner on the interior design for Muse, with luxurious fabrics, marble and wood panelling juxtaposed against striking contemporary features.

When positioned inside the homely corner townhouse, these elements come together to reflect Muse’s key concept of memorable fine dining in an intimate setting.

Through Tom’s take on experience-led dining, Muse invites guests on a culinary journey that has been designed to create lasting memories. From the six-course and ten-course tasting menus, each dish harks back to something or someone who has influenced Tom, paying subtle and artful culinary homage.

One such dish, ‘Conquering the Beech Tree’, has been inspired by childhood fearlessness and memories of boldly climbing a huge beech tree with his twin brother at the end of their garden.

This is mirrored at Muse in an unconventional joining of Langoustine, pork fat and burnt apple, which rings true to Tom’s belief that as a chef he should never be afraid to take risks.

Throughout the menu, dishes champion just a couple of key ingredients, use carefully selected produce, and aim to simultaneously intrigue and scintillate guests.

A bespoke cocktail list has been crafted for Muse by the celebrated Ryan Chetiyawardana of Mr Lyan and Lyanness fame. All cocktails are prepared by the chefs, balancing the flavours of the drinks as they would food.

Tom Aikens is one of the UK’s most acclaimed and inspirational British chefs, still holding the record as the youngest chef to gain two Michelin-stars.

His remarkable career has taken him to David Cavalier’s in Battersea, Pierre Koffman’s La Tante Claire in Chelsea, Joël Robuchon in Paris, Gerard Boyer’s in Reims and Pied-à-Terre in Fitzrovia to name a few. It was at the latter that Tom was awarded two Michelin stars, aged just 26.

Tom remained at Pied-à-Terre for five years, then went on to open his immensely successful eponymous restaurant, Tom Aikens (2003-2014), which won a Michelin Star in its first year of opening, followed by ‘Rising-Two-Star’ status and 5 AA Rosettes in 2008.

Tom opened Tom’s Kitchen in Chelsea in 2006, serving comfort food favourites and seasonal specials. He also has an international presence, having opened Pots, Pans and Boards in Dubai in 2015, and three separate eateries at the Abu Dhabi Edition most recently in 2018.

Tom has written three books; Cooking (2006), Fish (2008), and Easy (2011), and has made several appearances on television, reaching the final banquet of 2013’s Great British Menu on BBC2 in aid of Comic Relief, and is now a veteran judge on Great British Menu.