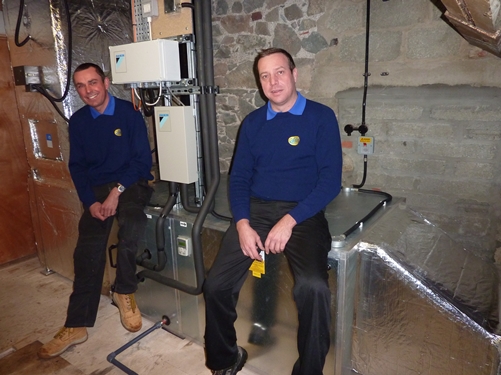 A new air source heat pump system has been installed at Castle Cornet to help preserve some of Guernsey’s most important historical artefacts.

Castle Cornet is a large castle located on the east coast of Guernsey and is known as the Island’s ancient harbour fortress. The castle incorporates a number of museums, including the Maritime Museum, which is located within the upper barracks of the building.

In order to address issues relating to damp within the Maritime Museum, a new, modern heating system was introduced and since its installation it has already proved very successful.

“We identified a problem in that the Maritime Museum which was getting cold and damp, especially in the winter months when the castle is closed. The building is approximately 250 years old and was not designed to house museum objects, so we needed to do something to ensure that objects on display would not deteriorate due to unsuitable environmental conditions.”

“To overcome this, we needed to maintain the humidity in the building within normal parameters of between 50% – 60%, a system known as conservation heating, which is widely used in museums and stately homes across the UK. Traditionally this type of system would use electric heaters or fossil fuel boilers but that can be inefficient and expensive to run, so we worked with AFM to design something more suitable.”

AFM designed a modern air source heat pump system, which was integrated with the existing ductwork to provide heat to the museum and control humidity levels.

“There was an old antiquated system which was hugely inefficient so needed to be removed, but in order to keep expenditure to Culture & Leisure as low as possible, the existing ductwork was reused and adapted to work with this new system.

“The system works by controlling the humidity in the air, by raising the temperature only a few degrees above the ambient air temperature which allows the air to hold moisture. Air is then circulated through air handling units located in the attic of the museum to extract the moisture. By using heat pump technology, we are able to have an efficiency ratio of nearly 4:1, which makes this system very efficient and cheap to run.”

The new system has been installed on both floors and work was undertaken in two phases in order to minimise disruption during the busy summer season. As no vehicles are allowed onto the road leading to Castle Cornet, all of the equipment had to be carried in and then lifted by hand up scaffolding and through a window in the roof space.

“Preserving the Island’s heritage is the museum’s core function and we are keen to develop systems that achieve this as simply and as cost effectively as possible. We are confident that this new system will play a big part in ensuring the objects on display within the Maritime Museum remain protected for the enjoyment of future generations.”