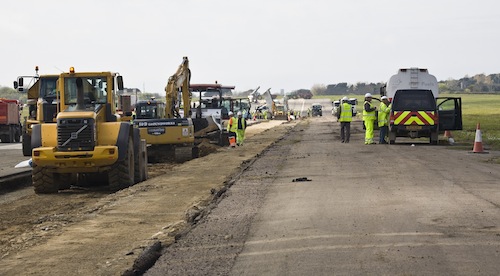 The £80 million maintenance and improvement works at Guernsey Airport have entered their final stages.

Scheduled for completion in 2014, the project is one of the largest developments at the airfield in more than 70 years and will equip the airport to serve the Island for the next 30 years.

The project comprises several major elements, the most high profile of which is the resurfacing of the runway. Last resurfaced in 1974 work was significantly needed and in March last year the airport was closed for two days to enable the reconstruction of large sections of the outer edges.

The main asphalt operation started last July, with the infill of an historic dip towards the western end. Over the course of 10 weeks, more than 45,000 tonnes of asphalt was used to raise the height of the runway by up to 1.6meters

Currently main contractors Lagan are applying the final top course which is expected to complete later this month.

This new section has effectively shifted the runway 120 metres to the west maintaining its existing operational length of 1463 metres but with a longer safety area now provided at the eastern end.

In addition to the runway strengthening and rehabilitation, the airport aprons have also been reconstructed. Prior to work commencing, a lot of the existing concrete dated back to when the tarmac was first built more than 50 years ago. Signs of wear and tear were very obvious, particularly as passengers boarded and disembarked from planes.

All of the old concrete has been crushed and reused on the airfield, primarily as a foundation material. To maintain normal airport operations, the work was carried out in phases starting last April.

Another issue which has been addressed is the dilapidated drainage system which dated back to the 1950’s. A new, much improved system has been installed, with additional pollution control measures and on-site storage to help safeguard and enhance the Island’s water supply.

New airfield ground lighting is also being installed, as well as new navigational aids, both of which will replace existing systems that are obsolete.

All of these elements contribute to the overall cost and complexity of the project, which has been carried out while the airport has remained operational. That said, the £80million investment has secured Guernsey’s air links for many years to come.

In addition to the airport, contractor Lagan has supported a number of local community projects over the past 18 months, including a new garden at St Martin’s School that combines play and education. Lagan Project Manager, Steve Turner said: “Lagan Construction Group’s ethos is to integrate itself into the communities in which we are working and we are proud to be part of island life and to support it in different ways.”

Within months of Guernsey Airport opening in May 1939, the onset of the Second World War saw commercial passenger services reduced and then suspended altogether when the German Occupying Forces arrived in the island. However when peace returned to Europe, services were quickly resumed and a period of rapid expansion in aviation began.

In the first full commercial year of operation, 1946, Guernsey Airport welcomed 54,124 passengers. A decade later the annual total had nearly trebled and in September 1956 the airport received its one millionth passengers. According to official figures, it was then the seventh busiest airport in the whole of the UK, Channel Islands and Isle of Man.

Originally the airport comprised of four grass runways which varied in length from 2,040 to 3,060 feet. In 1960 the airport opened a new tarmac surfaced runway with a length of 4,800 feet and this runway remained in operation until Lagan’s current development.