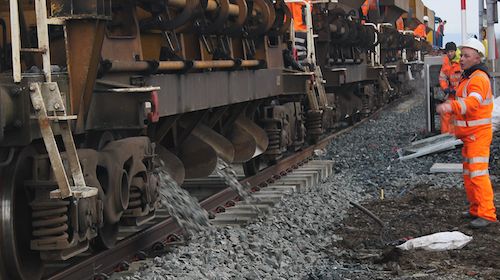 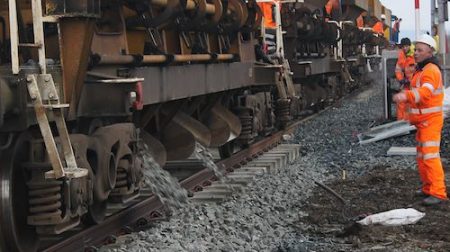 Earlier this year, Translink celebrated a significant milestone, marking a year since the reopening of the railway line between Derry~Londonderry and Coleraine.

The project took just over eight months to complete and saw the completion of essential safety and engineering work.

This initial scheme of works formed a major part of Translink’s Coleraine to Derry~Londonderry track renewals project. The overall project totals over £50 million and has been funded by the Department for Regional Development.

During the first phase of the scheme local contractors, McLaughlin & Harvey and McCann BAM Rail JV delivered the major track engineering work; the project began in July 2012 and ran until April 2013. The contract involved McCann BAM Rail JV relaying a full track between Coleraine and Castlerock as well as between Eglinton and Derry~Londonderry.

McLaughlin and Harvey Ltd’s role involved the delivery of track safety improvement works including track re-railing between Umbra and Eglinton. The re-opening marked the completion of the first phase of the Renewals Project.

As more people are travelling by train, Translink realised the need to regenerate the current services and facilities. The first phase of works improved sections of the track which pass through scenic coastline and the completion of this project allowed more people to appreciate the beautiful scenery.

A temporary timetable was operated during the closure period and bus substitutions were implemented for passengers. Those living in households in the area were also informed about the works and changes to local services in order to maintain a good relationship with those impacted by the works.

During the works a number of roads were closed in order to facilitate the timely completion of the scheme. Diversionary routes were set up and the onsite team worked during the day and overnight in order to complete their tasks as quickly as possible.

When the project was announced Eugene O’Brien, Head of Track, Translink NI Railways said the safety of the public was of paramount importance. The public were informed that engineering trains would be operating along the line throughout the project and therefore were aware of the need to stay vigilant.

To mark the unveiling of the new service a year ago a special train departed Belfast making the inaugural passenger journey to Derry~Londonderry and picking up civic dignitaries and community representatives along the route before a special re–opening ceremony took place in the city’s Millennium Forum.

Translink Group Chief Executive Catherine Mason was at the ceremony and said:

“This project will secure the long term future and sustainability of the Northern corridor rail link which provides vital connections to jobs, colleges, universities, shops, businesses and local attractions.

“Its revival will help strengthen the economic landscape in the North West and will also mean that the train is an attractive way to reach the UK City of Culture to join the celebrations planned for the months ahead. Translink is proud to be the official transport partner of the City of Culture.

“We worked hard to complete this work ahead of schedule. We want to celebrate the achievements of everyone involved in delivering the project and thank all our customers for their patience and support as we worked hard to improve local rail services.”

Catherine said she hoped that people would enjoy the train service and urged people to experience the beautiful views on offer during their train journey. She also thanked the Minister for Regional Development, his Department and the Trans European Transport Network Fund for their essential funding which allowed the works to complete. The investment will make services more reliable and therefore will ensure customers are satisfied.

Ongoing works, as part of the renewals project, include the installation of new drainage, new ducting for signalling cables, overhaul of the Bann Bridge and reconstruction of Pottagh Bridge.