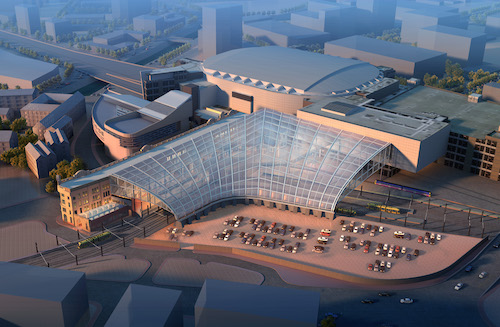 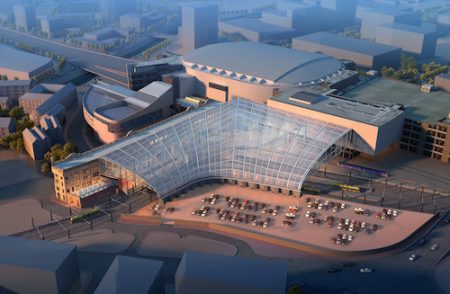 A Network Rail commissioned project to transform Manchester Victoria Station is progressing well and is on track to complete early next year.

The £44 million project began in April 2013 and is part of a wider £1 billion scheme of works by Network Rail aimed at improving rail services across the North of England.

Rail Construction News caught up with Faisal Farooq, Project Manager at Network Rail, to find out more about the project. The work has been undertaken in order to maximise the station’s capacity after it was voted as one of the worst stations in the country in 2009. The project is a partnership scheme and involves the renovation of Victoria’s metrolink and tram system as well as the general railway station.

The Metrolink infrastructure is being completely remodelled, expanding from two to three tracks. Work is being carried out to rebuild the stop and, when complete, will feature additional platforms and improved passenger facilities. Throughout the works, trams continue to pass through Manchester Victoria in both directions on a single line of track. In order to safely maximise the number of trams that can run on the single line, the stop is temporarily closed to passengers.

Metrolink passengers have been advised to use the nearby Shudehill stop for connections with Manchester Victoria’s rail services and the Phones 4u Arena.

Morgan Sindall is acting as the principal contractor on the scheme working alongside DBP Architects. Works to the station include the construction of a new roof, refurbishment of the concourse, the introduction of a new link bridge between the station and arena, the installation of a new retail unit, as well as restoring the existing heritage building, which is partially listed.

The reasoning behind the arena link bridge is to separate out passengers travelling with Rail Network from those wanting to go to the arena. The arena has a capacity of 21,000 people and hosts events on a weekly basis so the footfall of people within the station is huge.

So far works have progressed steadily; the scheme began in April 2013 with the construction of a temporary roof to separate the station from the works above. The old roof was then dismantled during allocated timeframes, usually at night when the trains were not operational, from Spring until Autumn 2013.

15 large buttresses were then constructed on site before works began in late 2013 on the arena link bridge and cleaning the stations building façade. At the start of this year Victoria’s tram stop was closed in order to complete the works in the station; the operation of trams through the station was still able to be maintained despite the works.

Earlier on this year the first part of the station’s new roof was installed; the roofs largest rib weighs 80 tonnes. When completed, the roof will span the entire metrolink and Victoria building stretching from the floor to the ceiling.

The final section of the link bridge has now been installed, with the team able to complete the structure when there were no events on at the arena. Over the past few weeks the large bubble cladding for the roof structure has been installed and will continue over the next few months. Remaining works include compost refurbishment, renovating the heritage elements of the building, as well as installing glazed doors at the front of the station.

Rapid 5D specialise in the implementation and deployment of specialist software services, providing a totally integrated Building Information Modelling environment for construction and engineering. We caught up with Steve Brunning, Managing Director of the firm, who told us about his involvement in the Manchester Victoria project. He commented:

“We established the software protocols and worked with the design team on the project, as well as undertook the quality audit reviews on the models. We also carried out costing plans.

“This was a massively important project; it was great to work with Morgan Sindall, Network Rail, the design team and all the specialist subcontractors involved in the project.”

Faisal Farooq said that although the project has run smoothly there have been some challenges during the scheme. He commented:

“Geographically the station is within the city centre and so trying to get materials on site has been extremely difficult. We have also had to take into account other stakeholders in the area including Chetham’s School of Music, The Cooperative and the Phones 4U Arena. Making sure all of these organisations could use the access roads at the same time as us was difficult.”

The team are pleased that despite the challenging nature of the project there have not been significant disruptions to train services. Network Rail and the onsite team have been eager to deliver this scheme whilst maintaining an operational railway.

“Victoria railway is leading the way in terms of architectural design and it is a fantastic opportunity to be involved in delivering this project within the city. The main thing I have noticed is how proud of this site the onsite team are; they are happy to be making a difference to Manchester.”

The transformation of the station will see the listed elements of the station maintained as well as the rest of the station brought up to date to act as a fitting gateway for the city. This project is part of a wider programme of works at Network Rail.

Manchester Victoria station was opened in 1844 and encompasses a number of Grade II listed buildings and features that we are working to preserve and restore as part of the redevelopment.

A programme of sympathetic renovations include work on the war memorial, glass dome, Soldiers Gate, station mosaics, wall map and the familiar glass and iron canopy that runs the length of the station façade.