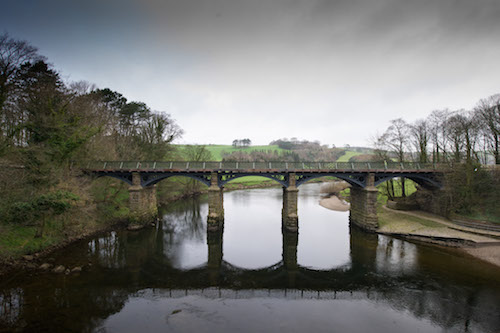 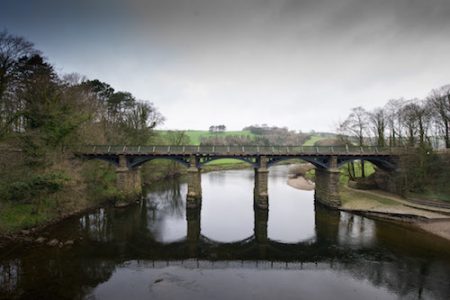 Lancashire County Council has been recognised by the prestigious National Railway Heritage Awards 2014 for their restoration of the Crook O’Lune East Viaduct.

The two bridges, which form the structure, were constructed in the 1800’s and run on either side of river beside the Little North Western Railway line.

The Grade II listed structure has most recently undergone a series of careful and sensitive repairs which saw the timber deck replaced, ironwork repainted and masonry repointed.

Rail Construction News caught up with Senior Bridge Engineer Kim Whalley, who acted as the Project Managers Representative on the scheme and oversaw the contract, from Lancashire County Council. Kim commented:

“Lancashire County Council maintain both bridges; one was restored in 2005 and the other project completed in December last year. The east bridge comprised five spans comprising wrought iron beams, a timber deck and a wrought iron lattice parapet.

“The timber deck was rotten and could be crushed in your hand so was structurally very unsafe. The bridge was closed, a temporary structure was placed over the old bridge and the team monitored it over a period of time to ensure the structure was still standing. After a while it became clear that the bridge needed demolishing; so the timber elements of it were removed and the entire timber deck has been replaced with 100 tonnes of timber.”

The team, which included main contractor Casey Group, then draft cleaned the structure, reconstructed and repainted it. The £1 million scheme was undertaken over the River Lune which contains a plethora of wildlife including salmon, otters and kingfishers. With this in mind it was important that the scheme did not affect the environment or its wildlife. As the old structure was painted in lead paint the team covered the structure whilst it was blast cleaned and repainted so that no paint could fall into the river and affect the local wildlife.

The complete restoration of the bridge structure was re-opened in December 2013. After the bridge was reopened the on-site team undertook other works including transforming the site compound into a wild flower meadow and landscaped area. Native trees were planted on the site and an old oak tree was transformed into an otter sculpture located on the riverbank beneath to provide interest for visiting children as the area attracts a number of tourists every year. 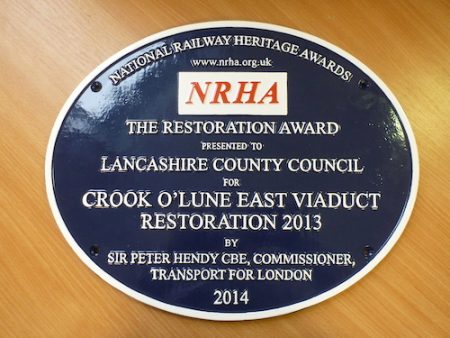 With regards to the council winning the Restoration Award at the National Railway Heritage Awards for its work on the Crook O’ Lune East Viaduct, which forms part of the footpath using the now closed line from Lancaster to Wennington, Kim Whalley commented:

“As it is an historic railway line the team were able to put a submission into the National Railway Heritage Awards which are very prestigious. The standard of the competition is exceptionally high so to be recognised by the awards was really good.

“It has been a career highlight for me to be recognised by such a prestigious award. Engineers often do the job and fade into the background so for the team’s effort to be recognised on a national basis is very pleasing.”

County Councillor John Fillis, cabinet member for highways and transport, was presented with a cast-iron plaque in February this year which has been put in place near the bridge and unveiled during a ceremony.

“This award is testament to the commitment of our staff to preserving this historic bridge for future generations and ensuring the bridge and surrounds provide enjoyment for the thousands of people who visit this stunning location every year.

“We are fortunate to have staff who are so dedicated and I’m very glad their excellent work on this project has been recognised as among the best in the country.”

Paint Inspection Ltd is a company with regional offices across the UK, specialising in paint inspection, either on a full time or an ad hoc basis, as well as coating and corrosion surveys and paint testing. The company’s inspectors are highly qualified with ICorr/NACE level 2 and 3 and are fully compliant with various project specifications such as highways, Network Rail, oil and gas projects.

Working on Crook O’Lune, Paint Inspection Ltd was employed by Lancashire County Council to undertake full time inspections during all phases of the works (on and off site), from the initial surface preparation through to application of the coating system and final close out of the painting works.

“As per any project we are involved in, we put great importance on ensuring the painting works are completed in accordance with the specification and industry standards, whilst also working with the contractor to ensure delivery of the project to our client, providing the required service life and maintenance periods.”

Harrisons Engineering Ltd specialise in large steel structures including providing steelwork for railway stations such as footbridges over platforms, staircases and ramp sections. The firm offer customers a range of services such as providing small and large fabricated steelwork structures, shotblasting facilities and a spray booth.

For the Crook O’Lune project Harrisons involved removing the 16 nine metre parapets on the bridge, transporting them to their factory and shotblasting and repainting them.

Mike Yearing from the firm commented:

“Our involvement in this project is important because the shotblasting and painting division is an area we have invested in in recent times and we are looking forward to developing it further.”