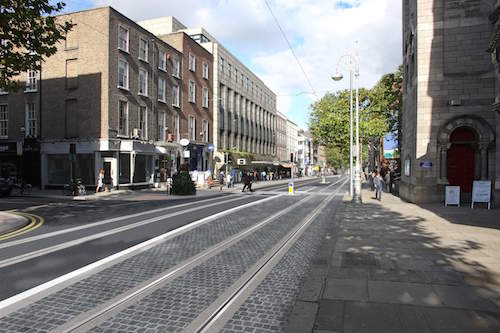 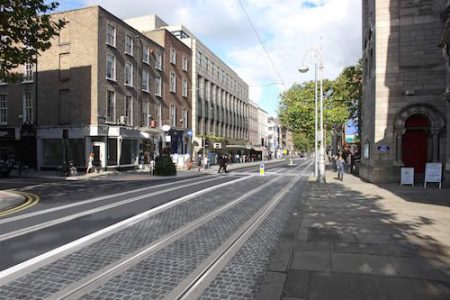 The Luas Cross City project in Dublin is set to integrate the city’s public transport network.

When completed, the project will provide an extension of the Luas Green Line from St. Stephen’s Green to Broombridge via Dublin City Centre, Broadstone and Cabra.

The project will present many benefits to the public including creating the ‘missing link’ in the Luas network. The scheme involves the extension of the Luas system to the north of Dublin city centre and greater integration of Luas, Rail and bus systems in Dublin.

The increased public transport share in the region will allow 10 million additional Luas journeys every year and reduce city centre congestion, as well as having economic benefits of enhanced mobility.

Works began on the project in June 2013 with the infilling of all of Dublin’s Georgian cellars that extend under the street system in the city. The cellars needed to be filled prior to the construction of Luas Cross City to create space for the essential diversion of utilities. These works were in progress up until January 2014.

The on-site team began the essential heritage works in September 2013 which involved the removal of some statues on the route of Luas Cross City, which have now been placed in storage. The removal of statues was necessary for their protection during the construction phase in order to avoid any damage. The heritage works were a vital part of the project and were underway for four months. 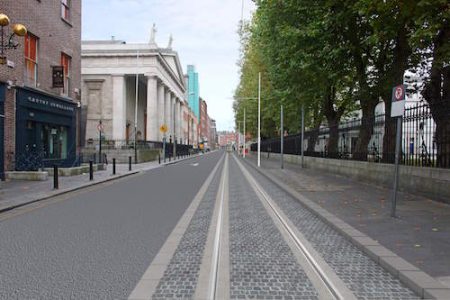 The main infrastructure contract was awarded at the start of 2015 and mobilization of the successful bidder’s team began in Spring with works commencing thereafter. The supporting structure for the tracks has already been built and so this section of the works will involve the laying of the new track and the surrounding roadway; the footpaths will also be reinstated.

By June next year the scheme will progress to dealing with the Luas’ electrical and mechanical systems. Electrical power, signal controls and other systems are needed to operate Luas trams and so overhead cables will be erected and the myriad of electrical and mechanical systems put in place to ensure the safe operation of the system. The completion of the M&E works is estimated to be around September 2017.

By March 2017 the testing and commissioning phase of the project will finally get underway.

Pat O’Donoghue, Director of Design and Construction at the Railway Procurement Agency, who commissioned the scheme, commented:
“It is great to be involved with this scheme as you get a great sense of personal satisfaction for the work done. We have developed a huge project here in Dublin but it isn’t just one person who achieves these things; it was definitely a team effort.”

Pat told Rail Construction News that the Luas lines originally comprised a Green Line and a Red Line which were opened in June and September 2004 respectively. Despite the inclusion of three extensions over the years on both lines the two were never connected to each other leaving a gap of 1.5km between the two lines. 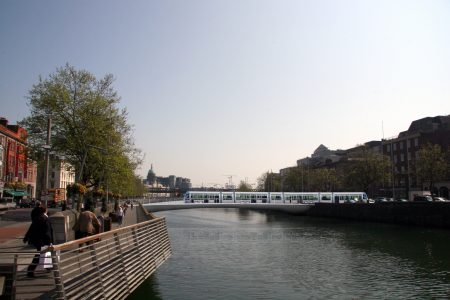 This scheme, which extends the Green Line therefore addresses the issue of connectivity between the two lines. The Green Line extension project will connect shopping and business districts with frequent services from convenient central stops from St. Stephen’s Green to Parnell St. The line will also serve the thousands of students heading for the new DIT Campus at Grangegorman and the established communities in Phibsborough and Cabra. A high quality Luas network connecting with all main line rail services and hundreds of bus services is therefore now in sight.

As a result of the scheme 10 million extra passengers will be able to use the network with 800 jobs having been created during the construction process.

The current lack of a connected Luas network inconvenienced many existing customers as well as resulting in the system being underutilised as many potential customers are deterred by the prospect of a 10–15 minute walk to their closest stop.

Since investment in light rail was first mooted for Dublin in the early 1990’s, it was envisaged that a fully connected network would be built. Luas Cross City is the realisation of this objective and will see the integration of existing and future transport services particularly the Luas Red and Green Lines, rail services from Maynooth and Dunboyne and the majority of existing Quality Bus schemes which enter or cross Dublin City Centre.

Luas Cross City will allow trips to be made over the entire Dublin region without the need for multiple interchanges on different modes of transport. This integration of existing systems will offer further economic benefits which extend beyond the immediate corridor of the route.