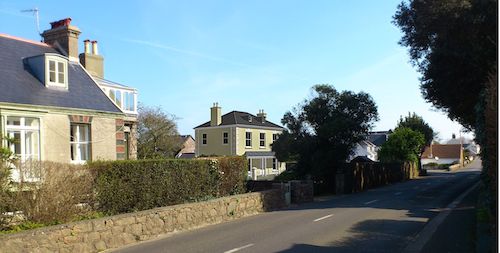 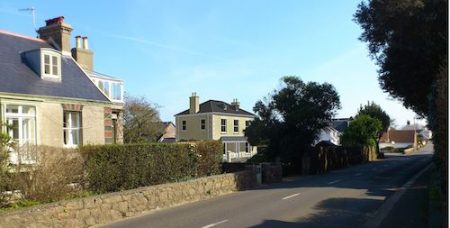 A project to construct a traditional villa property in Jersey is nearing completion following a 26 week programme of works.

Rockview is situated half way between Rue de Jambart and La Rue de Causie on the North side of La Grande Route de la Cote.

Premier Construction; Channel Islands Focus caught up with William Harben, a senior technician from A M Architects , who oversaw the project on behalf of their private client. William commented:

“The client, who owns the property next door and land next door as well, wanted a property to live in and so that was our brief.”

The buildings style is based on a 19th century villa examples of which can be seen throughout the Island. Les Marais House on La Rue a Don in Grouville has been used by the design team as a template for Rockview’s design. 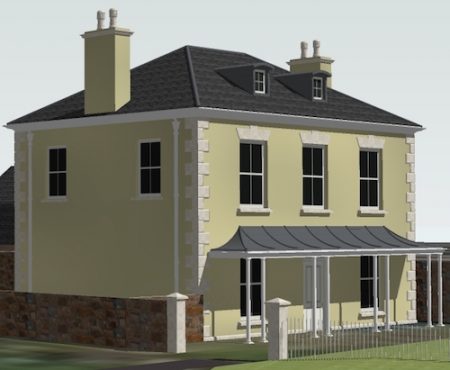 The proportions of Les Marais House have been used to compile the elevations of this property. The shutters have been omitted at Rockview with quoins and voussoirs introduced to add visual interest to the space.

A plinth has been added at ground level and at eaves level a narrower cornice has been fitted to allow space above the window keystones. The roof finish is natural Welsh slate with lead-roll hip and ridge capping.

The property also boasts two symmetrical chimney stacks which are centred on each end of the building with period clay chimney pots and stone cornice mouldings. The roof-scape comprises, on the front and back, two lead roll-top dormer picture windows in period proportions.

Rockview’s front door comprises four panels with top light and all the windows sit atop a solid masonry sill with reeded console brackets. The front elevation is completed by a ground storey verandah with scalloped lead roof supported on steel fluted columns. 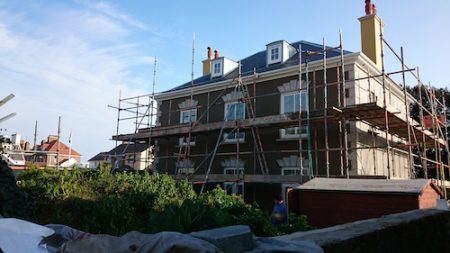 The team worked closely with the local planning authority and States of Jersey architects to ensure that Rockview blended in with the local architectural environment. The on site team are finishing off the canopy on the front of the structure and will then move onto the external works of the property and the last coat of render.

The interior is mostly completed with just the decoration to be undertaken and the kitchen to be fitted. Traditional cornice mouldings, picture rails and coving have been designed for the interior to match the cornice on the exterior of the building therefore maintaining a continuity of design throughout.

William said the team have encountered a number challenges during the project; he added:

“Creating a decent guttering detail was hard as it was based on an old style detail where the cornices envelop the whole gutter. We wanted to create a modernised detail and so specially made a cornice with a gutter concealed behind it.

“Also we originally planned to put lead detailing on the ridges and canopy but after looking at traditional buildings we realised these details were mostly zinc. So we now have a zinc scalloped canopy on the front of the property and zinc capping on the ridges. There have also been a few weather issues during the build including high winds and rain but nothing major that really affected the schedule.”

William said it has been a pleasure to be involved with this scheme:

“As architects we are proud of every project we do, especially to see it unveiled and finished. It will be sad in a way to see it go from our hands but that is the job.”