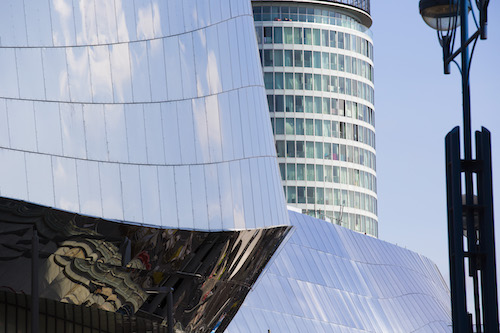 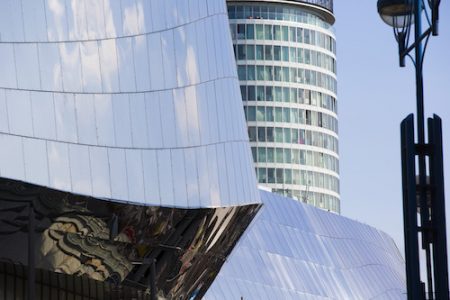 Boasting an iconic new atrium over a huge passenger concourse – five times the size of London Euston’s – the station has been rebuilt while trains continued to run as normal for the 170,000 passengers a day who use it.

Mace was both delivery partner and principal contractor for the project, working in partnership with Network Rail.

With brighter, de-cluttered platforms, improved entrances, a range of new facilities and an abundance of natural light over the new concourse, Birmingham New Street, one of Britain’s busiest inter-change stations, is also a retail destination in its own right.

The new station features 43 shops at concourse level and above it sits the new Grand Central shopping complex, including one of the UK’s largest John Lewis department stores.

The 450,000 sq ft shopping destination has created 1,000 jobs and is expected to attract more than 50 million visitors a year.

“This £750 million investment to modernise Birmingham New Street station is at the heart of our plans to use the power of infrastructure to build a more healthy, balanced and productive economy right across the Midlands.

“We are committed to build the Midlands engine, set to boost growth by attracting local jobs and investment, and this shows we are delivering on our long-term economic plan for the region.”

“The transformation of Birmingham New Street is a prime example of how our record investment in the railways is improving journeys for hardworking people and helping to rebalance the economy by driving growth across the country. 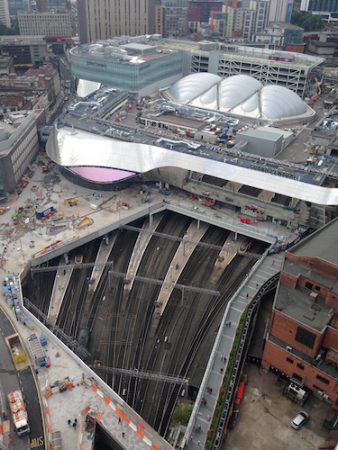 “The improvements made at this important transport hub have made it into a truly impressive building that passengers and the people of Birmingham can use and enjoy.”

“Birmingham New Street sits right at the heart of our rail network and the transformation which has taken place here is nothing short of stunning. The station is now bigger, brighter and better able to meet the needs of the growing number of people who use it each day.

“As Britain’s second city, Birmingham deserves a station of this calibre and, along with Grand Central, the investment we have made will help support the local economy and regenerate large parts of city centre.

“Rebuilding one of the busiest stations in the country without impacting on passengers’ journeys has been a major challenge, but I’m extremely proud to say that Network Rail and our partners on this project have done just that. That’s a significant achievement for everyone who has helped build this fantastic new station of which they, and all of Birmingham, can be very proud indeed.”

“Birmingham New Street station has undergone a magnificent transformation to become a vibrant, spacious and bright transport hub suitable for our city, and for the people of Birmingham to be proud of. The station redevelopment has been a key project for the city, stimulating economic growth and regeneration and, with the added creation of Grand Central; it has provided one of the best-connected retail spaces in the country. This is sure to have a catalytic effect on further regeneration of the city centre and attracting businesses to Birmingham.

“The development has also provided a gateway to opportunities for many Birmingham people, with over 3,000 construction jobs created, including over 115 apprenticeships. In Birmingham New Street and Grand Central we now have a bright, modern 21st century focal point for the city that will deliver integrated transport with premier retail that the citizens of Birmingham can be proud of. This is an exciting time and shows that Birmingham has a lot to look forward to.” 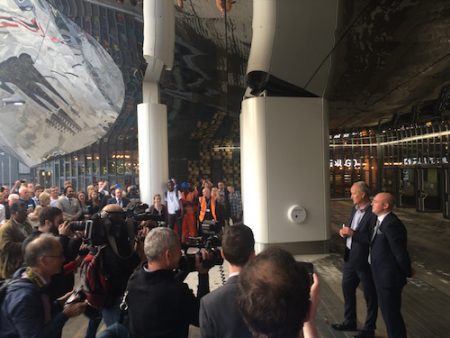 “The completion of New Street and the opening of Grand Central, including the new John Lewis couldn’t come at a better time for Birmingham with employment, GDP, foreign investment, exports and visitor numbers all on the up in the area.

“One of the negatives of the previous station – aside from the appalling first impression it gave to millions of visitors to our city, was that New Street effectively divided the city centre.

“The area known as Southside was not accessible from the busy main shopping and business areas, unless you were prepared to go around the station, but the new design changes all that with the main entrance actually opening onto Southside, this part of the city is now easily accessible and you can already see the benefits as investment is starting to flow to it.

“With the station and Grand Central complete, people’s perceptions and experience of the city will be transformed, while the wider project is an economic force not just for the site but for Birmingham and the West Midlands as a whole.”

“The transformation of Birmingham New Street station marks a sea-change for everyone who uses this important gateway to Birmingham. First impressions are important and the new-look station will greatly enhance the experience for business people, commuters, shoppers and tourists who arrive in the city in their thousands every day.”

“The transformation of Birmingham New Street station is incredible and well worth the wait for passengers and commuters. Being situated above the magnificent station will offer a unique and unforgettable shopping experience for all. We are proud that Birmingham is at forefront of such an impressive aesthetic design which will be enjoyed and admired by people across the UK and worldwide.”

Pedestrians will also find things easier, too. The station’s new layout reconnects the north and south side of Birmingham for the first time since the arrival of the railway in the 19th century. 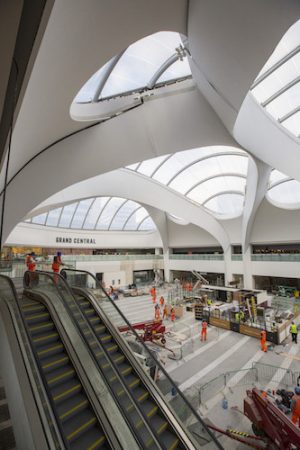 The new station development is already proving a catalyst for further schemes to regenerate the area surrounding the station and having a positive impact.

“The level of investment activity in Birmingham this year is unprecedented. We fully expect £1billion of commercial property to change hands by the end of 2015, a level never before seen in the city. This follows on from major institutions including Deutsche Bank, HS2 and HSBC committing to offices here, creating thousands of new jobs in the bargain.

“We know from our own conversations with both investors and office occupiers that the infrastructure improvements, and in particular the investment in New Street station, have played a part in their decision making. This flagship asset further cements Birmingham’s place on investor shopping lists.”

John Bryson, director of City-REDI and professor of enterprise and competitiveness at the University of Birmingham, said:

“The transformed Birmingham New Street brings new jobs to Birmingham through the development of the Grand Central shopping complex. John Lewis is a welcome addition to Birmingham’s retail mix and will attract other activities and people to the city.

“A great city is an attractive and connected city. The ‘new’ New Street will enhance local connectivity and productivity and also contributes to the reshaping of the narrative that supports Birmingham’s economy. The new station is an iconic building that will contribute to the on-going relocation of economic activity to the city and the development of local businesses. This has been a complex and long project and all involved should be congratulated.” 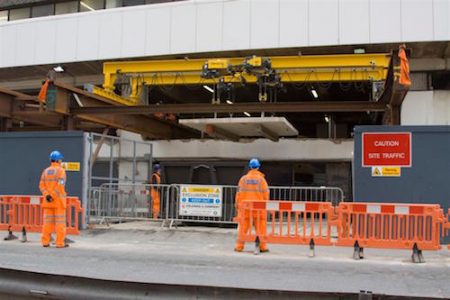 Andun Ltd is a specialist UK based Engineering Consultancy with 25 years of experience in complex demolition works, including the design of temporary works and specialist lifting equipment. They have been involved on projects such as Reading Station Redevelopment, WR Electrification, Crossrail and Battersea MAN gasholder demolition, and have undertaken numerous works at Birmingham New Street Station.

Andun were employed by Coleman & Company on the Birmingham Gateway Project at tender stage to advise on work methodology, develop concept schemes and provide 3D demolition sequences. They carried out numerous designs including the deconstruction of the NCP car park, which won Contract of the Year at the Demolition awards 2011, and the Atrium demolition works following the successful award of the Phase 2 contract.

Andun worked with other contractors on the project particularly with regard to lifting operations, and designed bespoke lifting equipment to facilitate removal of the mezzanine floor.

A five year journey supported by Nationwide Platforms, reached its destination on Monday 20 September 2015 with the opening of New Street Station in Birmingham.

With health and safety excellence a vital element of the project, Nationwide Platforms has used it to spearhead the introduction of new products designed to enhance safety and powered access productivity. These include the SkySirenTM secondary guarding system and the SkySentryTM fleet management and unauthorised access system.

“Continued support and initiatives throughout the lifespan of the project afforded us the opportunity to experiment with new products with a view to making work at height safer.”

Other innovations successfully introduced at the Birmingham New Street development, include the Nationwide platforms range of material handling equipment, SkyRakTM, SkyRakPlusTM and SkyRakBoomTM all of which enhance safe working at height.

Nationwide Platforms also advised on the introduction of a MEWP policy for the site, making secondary guarding operator protection mandatory for all boom lifts.

Andrew Briggs, Regional Director for Nationwide Platforms, said: “Working in partnership with Mace on such a large and strategically important project has been an excellent experience for us and our teams.

“It has also demonstrated our ability to deliver a total service package , including the best powered access machines, most advanced health and safety systems, plus and training support, precisely how and when it is needed.”

Throughout the build project, powered access technology has played a key role in overcoming major technical challenges, made more difficult by the need to keep the station open to more than 170,000 passengers every day.

Nationwide Platforms also played a key part in the installation of the hundreds of sheets of polished steel that now clad the station’s façade.

Nationwide Platforms is part of Lavendon Group plc, the European and Middle East market leader in the rental of powered access equipment.  For further information visit: www.nationwideplatforms.co.uk or follow @NWPlatforms.