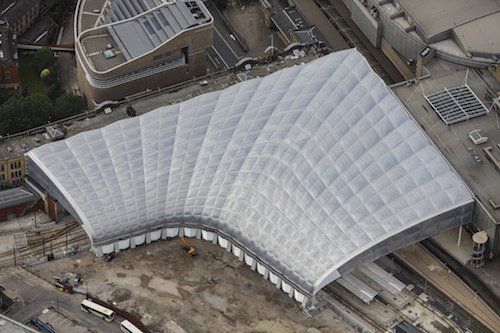 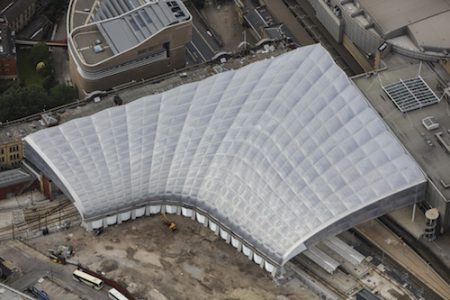 The Northern Hub project also has plans to provide better, faster connections between cities by unblocking bottlenecks in the regional rail network. The £44m project began on site in March 2010 and was completed at the end of this summer.

Rail Construction News caught up with Peter Jenkins, Director of BDP, to find out some further information. Peter told us:

“The location of Victoria station makes it a key regeneration connection between the city centre and development projects to the boundaries of the site; as a result of this it will be not only a gateway to the city but also a destination in its own right.

“Constraints presented by the existing fabric (in particular the deteriorating roofs of the platforms & concourse) meant that the station was unable to accommodate the increased passenger numbers of the Northern Hub and the expansion of the Metrolink tram network.” 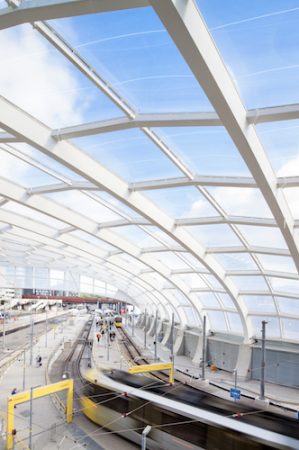 The different functions of the site have been drawn together into a single landmark space, with new concourse facilities that were constructed inside. The station complex covers a variety of functions, including the main entrance to the Manchester Arena and a multi-storey car park.

Additionally, the multi-modal transport interchange includes both heavy & light rail, regional & shuttle buses, taxis, private cars and bicycles. By working closely with Historic England and Manchester City Council, the project blends high-quality new architecture alongside the refurbishment of the original Victorian and Edwardian buildings, with favourite historic features celebrated and others revealed to the public for the first time in decades.

The station was designed to have an energy strategy that eliminates the need for artificial ventilation and maximises the benefits of natural daylight. One of the challenges placed on the design is to match the standards laid down by BDP’s previous successful redevelopment of the esteemed Manchester Piccadilly station.

“The redevelopment of the station was a hugely complicated logistical task, working with heritage buildings of different ages and constructing part of the structure over the River Irk, which passes underneath the station in a culvert. All this work was conducted whilst the railway station, tram stops and arena stayed operational throughout construction.”

An impressive 10,000²m transparent roof made from 375 inflated ETFE cushions dominates the scheme, supported on the elliptical steel ribs, the longest of which is 100m long and weighs 87 tonnes. The building is enclosed by the existing station buildings and the arena on two sides; the other elevation is formed by the dramatic sweep of the roof curving down to meet the ground. Giving the station a much needed facelift, the existing frontage was also resurfaced in yorkstone. 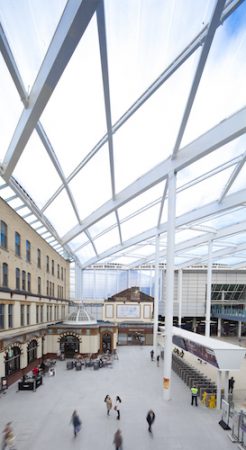 “BDP’s origins are in Manchester, the team who developed it work in Manchester and I’m from Manchester; it has therefore been highly satisfying to work on. A project like this is very significant as it performs a major role in the infrastructure of the city. Tens of thousands of people use it every day as commuters and visitors to the city, and hence it has an important role in the identity of Manchester.

“Part of the success of a station project is to make sure it is easy to use, providing safety and security to passengers whilst also functioning effectively for the management of the station.”

Originally established in 1961 as Building Design Partnership, BDP now has studios across the world. These combine local knowledge with the vision, values and infrastructure of a major award winning practice, delivering quality time and time again. 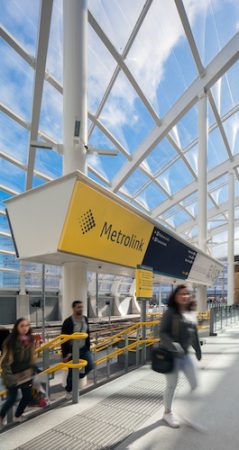 BDP’s transport team in Manchester works across the country on stations in Nottingham, Chester, Swansea, Stockport, Northampton, Pontypridd and Port Talbot (amongst others). They have also developed station designs in Abu Dhabi, Russia and China.